After more than a decade since the first planning discussions occurred, the city of Chandler approved a contract for the final design phase of the Field of Honor Veterans Memorial.

“The concept was to put together a memorial that veterans would like and one that, I know, resonates with a lot of folks,” Council Member Matt Orlando said. “The exciting thing about it is that the city’s veterans designed it. The whole design was designed by veterans. Veterans are humble; they are not going to brag or any of that type of activity. But something like this, for them, is a silent way of thanking those who served and honoring the memories of those who never came home and all of the military families.” 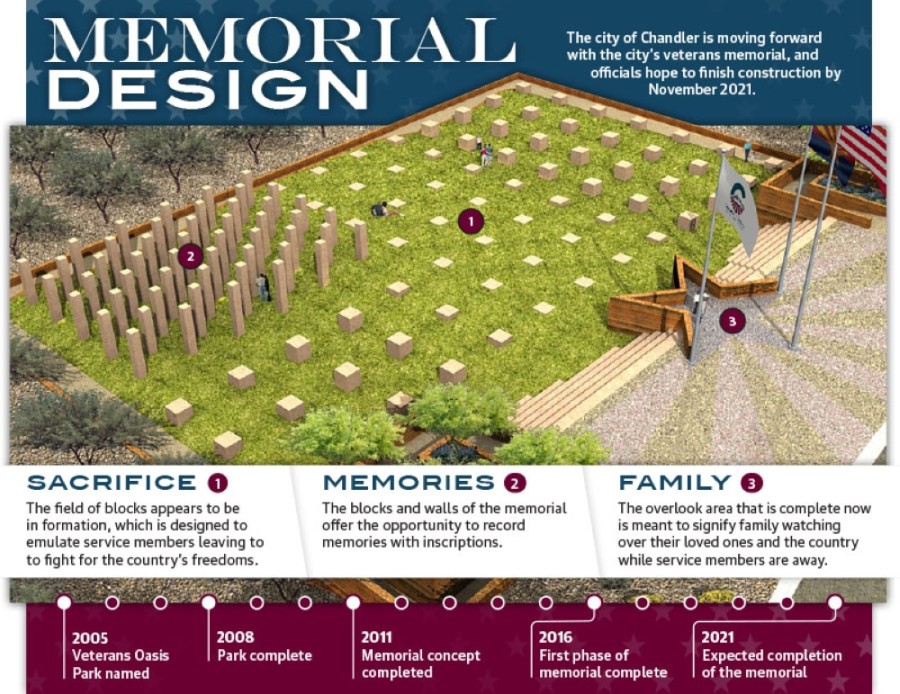 The memorial is the first of its size and scope in the southeast valley, according to city officials. With the second phase complete, the memorial will take up roughly half an acre at Veterans Oasis Park. The memorial space will honor all veterans and pay tribute to all branches of the military while highlighting a wide range of American history, serving as an educational resource and providing a space for reflection for the greater southeast community.

It’s been four years since the first phase of Chandler’s Field of Honor Veterans Memorial was dedicated, and I’m pleased to see the process finally proceed to the second phase,” Chandler Mayor Kevin Hartke said. “This memorial is important to our community and to the council. It’s a way to properly remember our local veterans and recognize them for their service and sacrifice to our nation.”
RELATED STORIES

City officials hope the memorial will be complete in November 2021. The second phase is expected to cost $1.8 million, funded through the city’s general government capital projects fund.

According to 5-year American Community Survey results from the U.S. Census Bureau, between 2014-18 there were 12,662 veterans living in the city of Chandler—roughly 5% of Chandler’s overall population. In 2017, more than half a million Arizona residents were veterans, according to data from the U.S. Department of Veterans Affairs, about 10% of the state’s population.

City officials hope the memorial serves as a place of remembrance and recognition for veterans in the entire southeast Valley.

Orlando, a veteran himself, said with a rich history in the city’s fabric of veterans, the city wanted to honor their service and sacrifice in 2008 when the process of creating this memorial began. The city worked with various veterans organizations to come up with the design. The two phases of the memorial’s design are a reflection of that original design thought up by some of the city’s veterans.

When finished, the memorial will appear like a waving American flag from above. Each section of the flag and the pillars creating the flag will have meaning honoring sacrifice, memories and the families of those who have served.

“I love how they divided everything,” said Mike Simon, commander of the American Legion Post 91 in Chandler. “I’m glad the council views this as important enough to re-evaluate and put back on the map. The design and the why behind it—I think when it’s all said and done—I think it will be something people will go back and look at and be in awe. I think a tangible memorial is so important to veterans. How can you ever forget if it’s in the forefront and you continue to see it? You can never forget it.”

Mickey Ohland, park development and operations manager at the city, said he was honored to witness the process of developing the memorial. The first phase was designed by veterans and largely funded by donations, including a sizable donation from the Gila River Indian Community, Ohland said. Of the $716,865, about more than $500,000 came from donations. The city picked up the rest of the cost.

Lew Bradley, a Chandler resident who joined the Marines in 1950 at age 17, was part of the planning and fundraising process.

“I’m looking forward to seeing it completed,” Bradley said. “It’s even got my name on it on a plaque they have out there for the donors. It sure is so special. I pulled $10,000 from my IRA and donated it to the construction of it.”

Effects of the memorial

Bradley said he is grateful for a space that veterans and community members can visit to have a picnic, event or meeting, or just a space to sit and reflect.

“I see it as a symbol of gratitude,” Bradley said. “When it’s done, I want people to come and see it. Maybe they might even want to join the service.”

Martin Sepulveda, a former Chandler City Council member, said there has been a lot of talk of finishing the memorial, but he said he wants to see action. Sepulveda was enlisted in the U.S. Marine Corps and earned a commission to fly in the Navy before leaving active duty in 1988 and continued to serve in the U.S. Navy Reserve before retiring as a commander in May 2015. He was on the council when discussions of the memorial began. He said he believes the memorial has taken so long to finish because the council is not prioritizing it.

"This [memorial] doesn’t make or break who I am as a veteran or as a guy who lives in Chandler,” Sepulveda said. “If it’s worth talking about, it should be worth making sure it happens.”

For Ashley McWhirt, who has been serving in the Marines for 12 years—both active duty and reserves and currently works as a police records clerk with the Chandler Police Department—said she is excited about the memorial.

“It’s just kind of exciting that we can finally get it done,” McWhirt said. “I think it’s always nice to have somewhere for veterans to go and think about and remember all the times they had in the service and what it all represents for America and for all of our freedom.”

“I think it’s going to be a very special place,” Ohland said. “The design of it, and the honor of it, it’s really incredible.”
City of Chandler Chandler City Council
SHARE THIS STORY