Gilbert Mayor Jenn Daniels reiterated her message from the June 2 Town Council meeting in her June 3 weekly video message: that town must be listening during this period of unrest.

• Chandler seeking donations for Operation Back to School event

The city of Chandler has seen its highest unemployment rate in recent history, according to data released from the Arizona Commerce Authority.

Tom Blodgett and Alexa D’Angelo contributed to this report.

How to celebrate Juneteenth in Chandler this weekend

Nonprofit Chandler4Change, in partnership with the city of Chandler Diversity Office, will host a car caravan and Freedom Day celebration in honor of Juneteenth June 19.

7 businesses that have recently opened in Chandler

A sushi restaurant, a billiards and bowling business, and an Asian grocer are among businesses that have recently opened in Chandler. 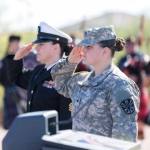 The event serves as an opportunity for local veterans to connect with a range of organizations and services they may be eligible for.

According data from June 14, 155,609 vaccinations have been administered in Chandler.

Grubstak in Chandler closes its doors

The Chandler restaurant opened in 2018.

Chandler City Council will host a public hearing on the city's proposed $1.06 billion budget during a meeting June 10 before voting on the budget proposal.