Over the span of two years, the city of Chandler has gone from earning revenue on recycling to paying for recycling processing.

Officials say the change in profitability is due to changes in the global recycling market and in turn, a change in what Chandler’s recycling contractor can accept from residents. City Council approved Feb. 27 a renegotiated contract with Chandler-based United Fibers that carries a higher processing fee and a new contamination fee per ton of recycling.

Between April 2017 and March 2018, the city made $517,943 from its recycling contract, according to officials. Due to changes in the recycling market, the city has generally seen a regular decrease in revenue since then. The city started paying for recycling in March 2019, and now, with the renewed contract, the city anticipates paying an estimated $1.2 million over the next 1-year contract between March 2020 and Feb. 2021.

Gregg Capps, water resources manager also overseeing solid waste, said residents will not see a rate increase due to recycling cost, that existing rates will cover the cost for this year. Capps said the $1.2 million will come out of the city’s solid waste fund. Council was presented with two options: either renew the United Fibers contract, or send all recyclable materials to the landfill.
“We’re just trying to keep that recycling program alive in Chandler,” Capps said.

Traci Conaway, recycling coordinator for the solid waste division, said the city hopes to educate its residents on what is acceptable in their blue bins so that it may help drive costs down.

Contamination is trash, officials said, and includes any materials that are not explicitly accepted in the blue bins and items that have not been cleaned of food or liquid contaminants. Those contaminated materials end up in the landfill.

The one-year contract extension with United Fibers is in an amount not to exceed $1.2 million. United Fibers requested in this contract the processing fee be increased to $80 per ton from $67 per ton and requested the implementation of a new waste disposal fee of $40 per ton for the disposal of contaminated materials. Chandler officials project that of the 19,800 tons of recycled material collected in the city per year, 19%, or 3,762 tons, is contamination, but officials hope to decrease that contamination rate by educating residents.

“Contamination, or items that aren’t accepted, are now going to have an additional fee, so it’s more important than ever that people are only placing the items that we accept in their bins,” Conaway said.

“What we want our residents to know is to focus on the items that the city accepts that will actually get recycled,” Conaway said. “We want to emphasize recycling right. We want residents to only recycle the items we want for recycling that will actually turn into a new product and we want residents to not put the items in the blue bin that can’t be recycled. That’s really contamination, or what we consider to be trash, and that item is going to be landfilled anyway. When it is landfilled after going to the recycling center it is actually costing the city more to landfill that item than if they simply put it in the trash can in the first place.”

Chandler USD board OKs contract for work at Weinberg School

What changed in the recycling market

Erin Jordan, a public information officer with the Arizona Department of Environmental Quality, said the change in the global recycling market is affecting not just Chandler, but all cities and counties in Arizona and across the nation.

“China used to accept everything in recycling bundles, which allowed the U.S. to be able to send highly contaminated bales for recycling,” Jordan said. “China has since changed their policies and will not accept contamination. To meet the new requirements, there are now increased processing costs due to high volumes of contamination in the recycling bins. And, the materials formerly accepted by China are now left behind. Cities and counties in Arizona are doing their best to continue their recycling programs, but it will take some time to build up end markets that can take the additional baled material and turn it into a product.”

In Chandler, Conaway said materials that can be recycled include paper, cardboard, glass bottles and jars, aluminum or steel cans, and plastic bottles and jugs.

“The more citizens don't know about their local recycling program, the more likely fees and other monetary adjustments will be put in place to deal with contamination in the recycling bins,” Jordan said. “It's very important that we all ‘educate so we don't contaminate.’ This will create a cleaner product that is more desirable to end markets and could help drive the creation of more end markets in the future.”

At United Fibers, the recycled paper collected is turned into insulation and then sold to contractors. The other materials are sorted by about 30 people who sort through the recycled materials to get rid of the trash and materials they do not accept. Then those materials are bailed so they can be sold to companies and countries that are looking for that material to create their products.

Capps said the recycling contractor in each municipality dictates what can and cannot be recycled in any given city.

“If a company isn’t making a product out of that [recycled] material, it’s going to be disposed of anyway,” Capps said.

Conaway said there will be a push in the coming year to educate residents about recycling in order to reduce contamination, thus reducing the overall cost to the city.

“It’s a hard concept for people because they want to recycle as much as possible, and we encourage that,” Conaway said. “But we don’t want people to ‘wishcycle,’ where sometimes people want it to be recycled or hope it can be recycled and they put something in the bin, and it’s not able to be recycled and they are just hoping that we’ll find a way and, unfortunately, we kind of let that go for a bit and it wasn’t important, but now fiscally it is important to the city and therefore our ratepayers.”

City Council Member Mark Stewart said one broken glass jar can ruin an entire ton of recyclables. He said he hopes the city will work toward sustainable solutions in the next year before the United Fibers contract is up again in 2021.

“We have to figure something out,” Stewart said. “We have to find innovative solutions to creating sustainability stories. The great thing about Chandler, and something that benefits the community, is everybody pitches in, everyone takes a role in it. We can lean on school districts and nonprofits and educate the community and have fun. We used to make money from recycling, and now we aren’t, and I want to fix it.” 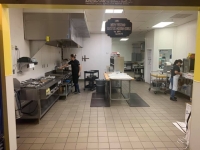 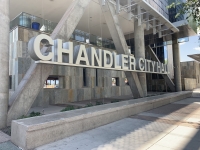 Intel announced March 26 it will make a donation to support COVID-19 relief in Arizona.

A Chandler woman is spending her time making masks for health care workers battling COVID-19 on the front lines.

Federal and state health officials have warned that coronavirus poses a greater risk to seniors. In Maricopa County, as of March 25, there were 70 cases among adults age 60 and over. As such, local grocery stores have responded by instituting special hours when the stores are open to seniors to limit potential exposure.

“I think it’s normal to be anxious, even for people not prone to anxiety. People are feeling a sense of panic that’s been going around."