Coy Payne, former Chandler mayor and first black mayor in Arizona, died Dec. 8, according to a social media post from a family member. Payne was 90.

But Payne had a long history with the city before even becoming mayor. According to Chandler Museum archives, Payne started his career teaching third grade in Chandler. He went on to work in Chandler schools for 31 years until retiring in 1989. A junior high school in the Chandler Unified School District—Payne Junior High—was later named after Payne and his wife.

Current council member Mark Stewart took to Facebook to express his condolences to the Payne family and recognize Payne for his many contributions to the city.

"Mayor Payne is a man of community and service and his legacy is spread all over," Stewart wrote. "Our prayers go out to his family at this time. Please take the time to remember him for the incredible service to our community as the first African American Mayor in the state of Arizona."
Chandler Coy Payne
SHARE THIS STORY

Construction will affect drivers on I-10 this weekend. 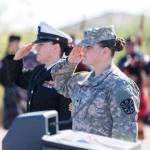