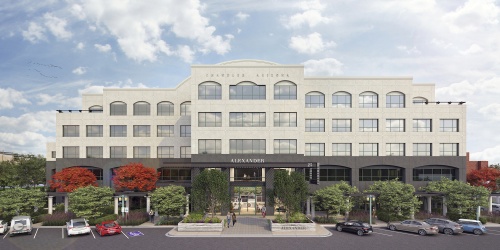 According to a news release, the developer plans to invest nearly $14 million in additional capital in the project. The buildings will be named The Alexander and The Johnathan, after Chandler's namesake Alexander Johnathan, better known as A.J., Chandler.

Work on The Alexander, located at 25 S. Arizona Place, is expected to begin in the first quarter of 2020 with a $5 million shell building transformation to create a 112,000-square-foot, five-story modernized office building, according to the release. The renovations will improve the building from Class B to Class A office space, enclosing the current ground-floor plaza and adding shared spaces and a health-and-wellness-inspired amenity package, according to the release.

“There is a tremendous energy in downtown Chandler right now—from new tech growth and new multifamily development to its collection of experiential, highly walkable amenities,” said Curt Kremer, George Oliver founder and managing partner, in a news release. “We are hopeful that our new concepts, The Alexander and The Johnathan, will thrive in this kind of environment, continuing our mission of delivering highly functional office spaces with a best-in-class amenity package.”

Features within The Alexander will include a training center with seating for 60 people, a coffee and juice bar, a hospitality-inspired lobby and lounge area, an outdoor activity and game area, a quiet library-themed common workspace and a billiards room, according to the release. The wellness center will offer a cardio room furnished with Peloton equipment, a yoga room, private showers and an attached Zen-inspired outdoor space. The improvement plan will also update building systems, such as elevators, restrooms and mechanical systems.

The developer also purchased the adjacent Chandler City Center located at 55 N. Arizona Place for $22.5 million, which will become The Johnathan. The rebrand will include similar upgrades as The Alexander building.

“Downtown Chandler continues to expand and diversify and the news of this investment to modernize the largest office portfolio in our downtown couldn’t come at a better time,” Chandler Mayor Kevin Hartke said in a news release. “We’re grateful for George Oliver’s commitment to downtown Chandler’s future and their tribute to our city’s history.”