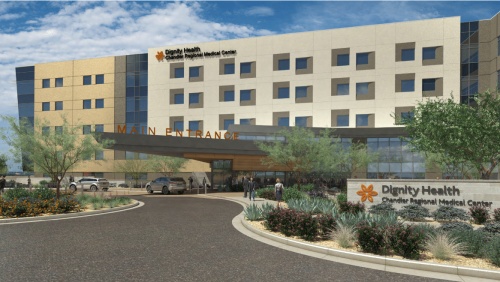 The tower, which is set to open in spring 2021, will add 96 patient beds and is expected to also add about 200 jobs, according to a news release. Chandler Regional's fourth patient tower, Tower D, will bring the medical facility's total bed count to 429—a stark contrast to when the hospital originally opened in 1951 with 42 beds.

“This expansion project is very exciting for all of us at Chandler Regional, and for the community at large,” said Mark Slyter, president and CEO of Dignity Health Chandler Regional and Mercy Gilbert Medical centers, in a release. “The new tower will not only bring new jobs to the East Valley, but it will allow us to further our commitment to providing the best care possible to our growing and aging community.”

The new medical tower will be built south of Chandler Regional’s current main entrance on what is currently a parking lot, according to the release. The tower will increase surgical capacity, add cardiac-rehabilitation services, and will also feature:


The project is being done by McCarthy Building Companies, which will also renovate 55,000 square feet of the hospital’s existing Tower C, which opened in 2014, according to the release.

The renovations will allow for eight new surgical suites and the expansion of outpatient services and operational departments. Renovations to Tower C will be completed in 2022 as part of Phase 2 of the project.
SHARE THIS STORY