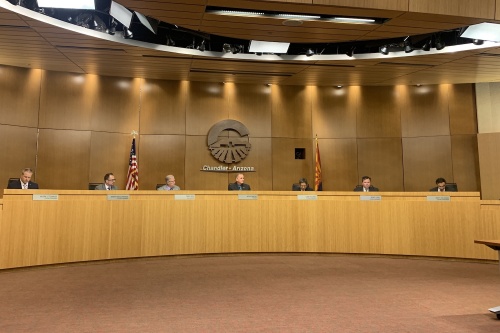 Chandler City Council met Sept. 9 in a work session to begin the process of updating the city's parks strategic master plan, which will serve as a blueprint for future park development and renovations projects.

The update will require the city and council to look at the existing and future park needs of Chandler residents, according to Andy Bass, the city's new community services director. Chandler has 67 existing parks with plans to have four more when build-out is complete; this includes neighborhood parks, community parks, regional parks and special-use parks.

Bass said the city has seen requests for more splash pads, sport fields with lighting, lacrosse fields, pickleball courts, unique playgrounds and dog parks in addition to a pump track, which is a kind of dirt track used for bicycle motocross. Bass said the master plan update will provide guidance for the continued development of the parks system, including improvements to existing parks and completion of parks that have already been planned.

The process is projected to take about a year, but council members told staff Sept. 9 they hoped the process could move quicker so they could plan for parks needs in the next fiscal year. Bass said the master plan kickoff would begin in January, and community outreach and stakeholder meetings would take place in the spring and summer. Based on those meetings, staff would develop recommendations and determine priorities and present a cost estimate and action plan in the fall, followed by a presentation to the parks and recreation board in November 2020 and a City Council presentation in December 2020.