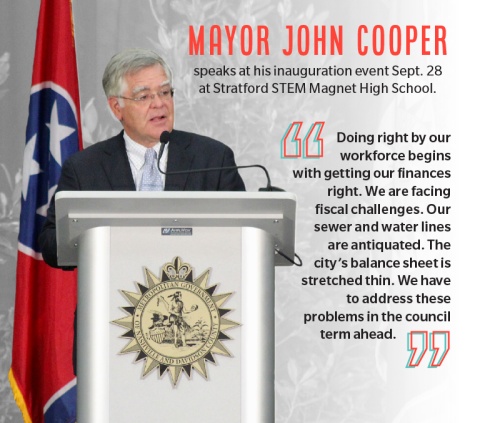 During election season, Mayor John Cooper pledged his loyalty to Nashville’s neighborhoods by promising that if he were elected, residents would benefit from downtown’s booming economy.

At his inauguration ceremony Sept. 28, Cooper said his plan to shift the focus from downtown to neighborhoods—a message that resonated with the 70% of voters who helped him unseat incumbent David Briley in the Sept. 12 runoff election—remains his priority.

“What our fellow citizens want from us is very clear,” Cooper said. “A focus on neighborhoods; a Nashville where tourism benefits residents, not the other way around; cost-effective, fiscally responsible government that is managed for everyone; a transparent and open government committed to high standards.”

In addition to spreading the wealth from downtown throughout Nashville, Cooper’s priorities include education, transportation and restoring trust in the city’s government, according to his 47-page policy book released in July. In his inauguration speech, Cooper said tackling these issues will lead to a city that works for all residents.

“Some people have thought that the revenues generated downtown should stay downtown,” Cooper said. “I disagree. The people of Nashville have made an investment, and now is the time to spread the benefits of growth—not just the costs—to all of our neighborhoods.”

In keeping with his commitment to neighborhoods, Cooper said tourism revenue generated from downtown should benefit underserved areas of Nashville.

“It is the time to invest in Jefferson Street, in Antioch, in Donelson and Bellevue and Goodlettsville and the other neighborhoods that make this a great city,” he said.

Cooper also touted his plan to invest in community issues, such as paving sidewalks, growing the city’s tree canopy and supporting the city’s parks system.  He said protecting neighborhood landmarks, such as Fort Negley Park—20 acres of city land near Wedgewood-Houston that faced redevelopment in 2017—is one example of how the city can support residents who live outside the downtown core.

“In many ways, the rebirth of downtown Nashville began with the decision to save the Ryman [Auditorium],” Cooper said. “I believe the decision to protect Fort Negley Park will mark a second rebirth of our city, and it starts with our neighborhoods and preservation.”

While a budget with a property tax increase failed to pass for FY 2019-20, some council members have said it will be necessary for FY 2020-21 in order to fund teacher salaries and other city expenses.

District 7 Council Member Emily Benedict, who represents the area of East Nashville where the inauguration was held, said the city should shift from austerity budgeting—a type of budgeting that looks for spending cuts to cover budget deficits—to prioritizing teachers, police and other public employees.

“We need development done for us, not to us,” Benedict said at the ceremony. “We may believe the silver bullet is tourist-generated, but the fact is that our tax rate decreased by 30% two years ago, and it’s no wonder our city is broke.”

Cooper said he favors the use of fiscal management strategy over “a sizable property tax increase,” according to his policy book. During his time as a council member, Cooper voted against a proposal that would have raised the tax rate by 15.8%.

“Doing right by our workforce begins with getting our finances right,” Cooper said. “We are facing fiscal challenges. Our sewer and water lines are antiquated. The city’s balance sheet is stretched thin. We have to address these problems in the council term ahead.”

Benedict said in order for Nashville to be a place where all residents can prosper, they must be equally represented. She said public employees have not benefited from the city’s growth.

“We have a lot of work to do to make sure our citizens can live where they work—to make sure Nashvillians can safely and efficiently move throughout the city,” she said. “We must make the sacrifices that our public servants have made for far too long, which means we must get back to a normal tax rate, and the time to do that is now.”

Following a contentious budget season in June, some council members are proposing that budget talks should begin as soon as this fall, as opposed to waiting until after May 1, when Cooper is required to submit his proposed operating budget.

Vice Mayor Jim Shulman appointed At-Large Council Member Bob Mendes, who has twice attempted to raise property taxes, to oversee the 12-member budget and finance committee that will be responsible for making recommendations for the mayor’s budget proposal.

“We’re going to have the budget process on us in a hurry, and this committee is going to have a lot of work to do,” Mendes told committee members at their first meeting Oct. 1.  “Our new mayor ran on the promise of finding new sources of revenue for the government and to work on spending issues. My plan is to support that effort fully, and [I] will be looking forward to working with the administration on that.”

District 23 Council Member Thom Druffel, who unseated Belle Meade-area incumbent Mina Johnson in the Sept. 12 runoff election, said he entered the race on a platform to help address the city’s finances and prioritize neighborhoods, such as the ones he represents. Druffel also serves on the budget and finance committee.

“We pay substantial property taxes, but we don’t see much of that coming back to our neighborhood,” Druffel said. “As a council, we have to work together to make sure that our growth benefits all of our citizens.”
SHARE THIS STORY