Hemp growth, CBD on the rise in Williamson County 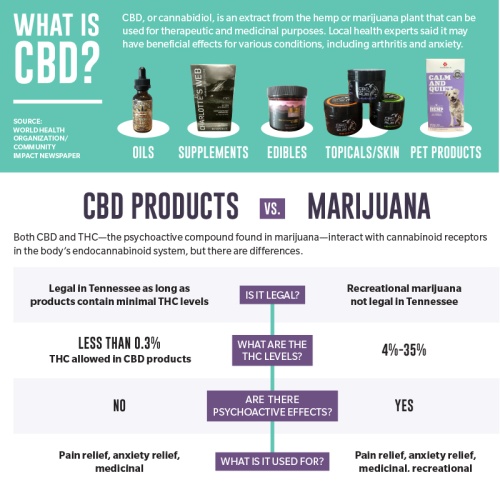 Retailers offering products with cannabidiol, otherwise known as CBD, are proliferating across Williamson County, including an influx of stores in the Franklin and Brentwood areas that sell health and wellness products made with the hemp-derived compound.

According to the Tennessee Department of Agriculture, more than 3,500 licenses to grow hemp were issued across the state in 2019 alone, an increase from just 226 in 2018. More than 10 stores in the Brentwood and Franklin region now offer CBD products, at least seven of which were opened in 2019.

“I think the need is here—the demographics, the people are definitely here—and it was a need that wasn’t being filled,” said Rodney Croteau, owner and operator of the Gabberdunes Hemp Company’s Downs Boulevard location in Franklin, which opened in September.

The Federal Agricultural Act of 2014, also known as House Resolution 2642, allowed the TDA to initiate a pilot research program into growing the hemp plant, according to spokesperson William Freeman. More commonly known as the 2014 farm bill, this was the first piece of legislation that made it possible for licensed growers to create and market hemp-based products in Tennessee.

“It’s been decades and decades and decades since anybody was able to grow this plant, and the biggest purpose was for farmers, research institutions, universities or interested growers to be able to produce this crop and learn how to do it,” Freeman said.

After several years of information-gathering, hemp was taken off of the federal list of controlled substances via the next iteration of the farm bill, the Agricultural Improvement Act of 2018, also known as HR 2. This step is what opened up the floodgates for mass production, according to retailers.

“This is really the first year—2019 is the first year that it’s been legal to grow hemp on any kind of mass scale in Tennessee,” Croteau said.

The number of farmers licensed to grow hemp in Tennessee has skyrocketed from 49 in 2014 to 3,653 as of September 2019, although, according to Freeman, not all of those licensed growers may have a crop in the ground currently.

There are more than 60 compounds, called cannabinoids, that can be extracted from hemp plants and used to create CBD products, according to Erin Crawford, general manager of Harvest by LabCanna, a CBD-centric coffee house and restaurant in Fairview.

These cannabinoids can be processed into oils, tinctures, salves, supplements, lotions and even pet products.

CBD and THC are the most well-known cannabinoids, she said. THC is the cannabinoid that produces a psychoactive “high.” It is found in large amounts in marijuana, but the hemp from which CBD is derived must have less than 0.3% THC content, according to state and federal regulations.

Due to the market for hemp products, Freeman said the crop offers opportunities to farmers looking to diversify their fields, though they should do their research before planting.

“Our whole perspective is: any way and chance that a Tennessee farmer has a chance to diversify—that’s something we want to support,” he said.

“What it’s doing is relieving inflammation in the body and even in the brain, which can be a root cause of so many things,” Matt Hogencamp said.

CBD retailers said the products are claimed to engage with receptors in the endocannabinoid system, which was discovered just 30 years ago, according to Croteau.

“It’s a system—the endocannabinoid system—throughout our human bodies that helps maintain balance, or homeostasis, across the board,” he said. “That’s why you hear so many different, wide-range benefits of CBD.”

Different products contain different combinations of cannabinoids, allowing for additional variations in effects felt by those who use the products.

“Every day, I’m surprised by someone saying it’s helped with something new,” Crawford said.

For that reason, “isolate” CBD products are available that only contain CBD or another specific cannabinoid rather than the full spectrum of compounds.

“You would not believe the pouring-in of amazing testimonies that we get as a company every day and that we have been getting for four or five years now,” Crawford said.

In conjunction with several other state departments, the Tennessee Department of Health issued a public health and safety advisory in September 2018 warning citizens the evidence is still inconclusive regarding the health benefits of cannabis-based products, including CBD.

The advisory listed chemotherapy-related nausea,  multiple sclerosis and chronic neuropathic pain as exceptions where cannabis was found to be beneficial for patients.

“Outside of these conditions, there is not sufficient evidence to show that any forms of cannabis, including marijuana and hemp, are safe and effective as medications,” the advisory said.

To help farmers with what is still a relatively new product in the area, Freeman said the TDA is involved with hemp production “from seed to harvest.” The farm bills passed in 2014 and 2018 do not allow for just anyone to grow hemp plants, he said.

“If anybody is in Tennessee and growing hemp legally, they have to have a grower license from the Tennessee Department of Agriculture,” he said.

Freeman said the department seeks to ensure that growers are maintaining levels of THC lower than 0.3% in their hemp crops. Additionally, the TDA issues permits to transport hemp plants, enabling growers to communicate effectively with law enforcement if stopped.

However, for retailers, regulations and licensing are nearly nonexistent, according to local store owners. This low barrier of entry means store owners are wary of lower-quality products on the market, they said. Ashlea Hogencamp recommended that prospective CBD consumers consult with their doctors before buying products and look for third-party, lab-tested products with certifications.

“Make sure you’re buying quality [products] from a reputable source, and ask questions—ask to see the lab testing; ask to see the statement,” she said.

Crawford said there is a “very fine line” with regulation, that the right amount could benefit the CBD market as a whole, but too many rules and restrictions could make CBD products less accessible for the general public.

State Rep. Sam Whitson, R-Franklin, said while he does not know exactly what will happen next legislative session,  he does not expect that the state Legislature will pass legislation to restrict the growing of hemp or the sale of CBD products.