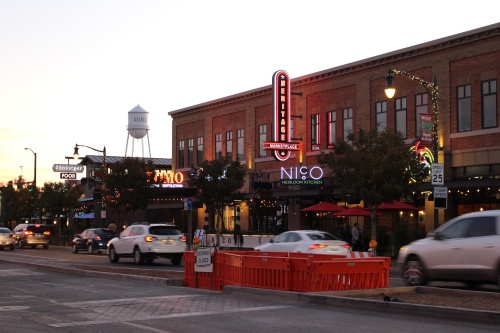 Modifications to Gilbert's signage ordinance could bring more neon signs into the Heritage District and add downtown branding that goes beyond the Gilbert Water Tower. The signs would be noncommercial.

Up to three large neon signs, which the town hopes will be used for area branding, could go up on Heritage District rooftops after Town Council approved sign ordinance modifications Oct. 17.

The idea of the noncommercial signs divided the town, with residents coming out to voice opinions for and against the signs through every step of the approval process.

With its final say, council voted 5-2 to approve the measure, with Council Members Brigette Peterson and Scott Anderson voting in dissent.

Under the proposal, buildings at least three stories in height could put up noncommercial signs of no more than 200 square feet on their rooftops. One would be allowed on the north end of the Heritage District, another on the south and a third in the central portion.

Supporters of the measure hope the noncommercial messages will mark the area as the Heritage District of Gilbert.

“It would bring a unique factor to downtown Gilbert that would actually help bring people to downtown,” Gilbert resident Rob Elder said. “It separates it apart from, say, downtown Chandler or other downtown areas. It’s something that would be talked about when people are visiting that would enhance our ability to direct them to downtown.”

Opponents cited multiple concerns, from light pollution to loss of control of the messages to creep of where the rooftop signs are allowed to beyond three in the Heritage District.

“There should be a major concern from what these signs are going to say,” resident Sandra Reynolds said. “You really need to ask yourself why someone would pay a huge amount of money to put a sign up that doesn't promote their business. Everyone seems to be minimizing the fact that even though each sign must get approval, they can't base approval on what that sign says, according to code … I think it would be very irresponsible for the town to open themselves up to this highly probable embarrassment.”

In response to questions from Council Member Jordan Ray, Town Attorney Christopher Payne said the signs, as long as they stay out of promoting businesses, could be approved based only on design and not on message.

Mayor Jenn Daniels reminded council, however, that when the town passed the sign ordinance, council members expressed a desire to err on the side of allowing free speech even if it created the potential for occasional embarrassment.

Daniels was among the five supporters on council, who mostly voiced interest in the potential for branding and pushing the town further forward in its development efforts.

However, Anderson and Peterson were not sold. Both council members expressed a concern about opening “Pandora’s box” if the regulation passes.

Peterson further said that renderings of what the signs could look like in the district were a turn-off to her while Anderson had different ideas on the branding.

“I feel strongly the Heritage District should have one icon: the water tower,” Anderson said.

Elsewhere, council voted 6-0 without discussion to terminate its agreement and lease with Operation Welcome Home Veterans AZ. The lease gave the nonprofit group land next to the town’s public safety administration building for the development of a 5-acre, military-themed park, the Western Veterans Vitorial.

However, the group decided to dissolve itself last month as fundraising efforts for the park fell short.

Council Member Aimee Yentes, vice president of the group, recused herself from the termination vote. However, after the council meeting, she expressed her disappointment in seeing the group, which also supported veterans and had educational programs, dissolve.

“Obviously, I and everyone else are saddened and disappointed,” she said. “But we’re also very proud. We’re proud of the work we’ve done over almost 10 years.”

The mayor released a statement Oct. 17 saying she was saddened by the end of the partnership with Operation Welcome Home Veterans.

“The values of our community keep us committed to veterans and supporting our men and women in the military and their families,” Daniels said. “We will continuously find ways to serve our veterans and show gratitude for their service.”

Council approved on a 7-0 vote the town’s water allocation policy. The policy defines what cuts would be made in the event of increased water shortages in town and how those cuts would be implemented.

Council also approved on a 7-0 vote an update to the land use classification of 124.8 acres of land at the northeast corner of Recker and Warner roads from various commercial designations to mostly residential, with 30.6 acres of light industrial classification.

Council rejected a Lennar Homes plan Dec. 6 to change the area into residential development as it wanted to preserve space for business in the area. Two weeks later, Ray, who had voted against the project, led an effort to reconsider, allowing the project a way to move forward faster than the 12 months normally required for a project to come back before council once rejected. In approving the project, Vice Mayor Eddie Cook, who originally opposed the project and the reconsideration, called the new plans “a good compromise.”