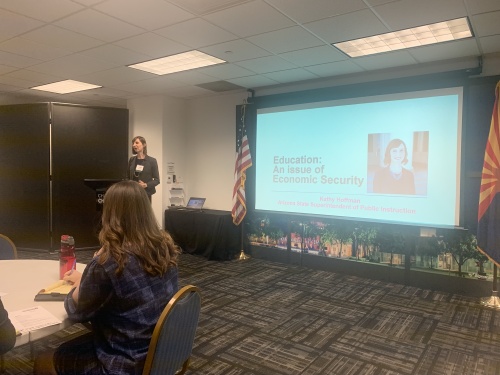 On Oct. 11, Hoffman told a group gathered for a policy event series hosted by the Chandler Chamber of Commerce she plans to work on those four items during the next legislative session.

Hoffman also said she is prioritizing staff retention in schools, including both teacher and support staff positions, and noted 20% of all educator positions statewide are unfilled, and many districts have a need for more bus drivers and cafeteria workers.

"I've been meeting with both Republican and Democratic legislators already, talking about our priorities for the next session," Hoffman said.

Hoffman said in a recent round of applications for school safety grants that would fund the additions of school counselors, social workers and school resource officers, the Arizona Department of Education received applications from nearly 900 schools across the state. Based on those applications, schools indicated about $97 million of needs, but Hoffman said officials only have $20 million to allocate.

"We are barely meeting the needs of our schools, and we are charged with distributing this in the most equitable way we can," Hoffman said. "Twenty million dollars is clearly not enough. School safety is a bipartisan issue that we can all get behind in all of our communities."

Hoffman said of the schools that submitted applications, 40% asked for counselors, 35% asked for social workers, and the remainder asked for school resource officers.

Hoffman also said increasing funding for special education services is a priority for the Arizona Department of Education. She said special education has been historically underfunded by both state and federal governments, leaving school districts to pick up more of the bills for those services and programs than intended.

Providing more mentorship to new teachers is also a priority Hoffman said she hopes to address in the coming year, as is fostering a partnership with the Department of Economic Security to fill vacant positions in school districts.

Hoffman said the state department of education is assisting in a partnership between Mesa Public Schools and the Department of Economic Security to fill vacancies in the district, particularly those that do not require candidates to have completed higher education.

"I wanted to go statewide," Hoffman said of the new pilot partnership, which began in August. "Since August, through this partnership, the district has already hired 34 new people. This is just where it's starting. I cannot wait to take this statewide."