Belmont University in Nashville to host presidential debate in 2020 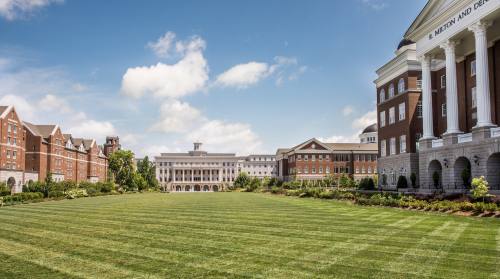 Belmont University is hosting a presidential debate in 2020, the university announced Oct. 11.

The third and final presidential debate will be held on campus Oct. 22, according to University President Bob Fisher.

"Our desire to host this event along with countless city and state-wide debates on this campus stems from our desire to contribute to the democratic process through civic-minded service," Fisher said at a press conference. "We don't want to simply talk about our mission to engage and transform, we want to live it out."

Belmont previously hosted a debate between Barack Obama and John McCain in 2008 and served as an alternate host site in 2016, according to the university.

"In 2008, the town hall debate was a transformative moment for our university," Fisher said. "It changed the way we thought about ourselves. We thought that if we can pull this off, we can do anything."

Additional details about the debates will be announced in 2020, according to the CPD. All debates are 90 minutes without commercials.