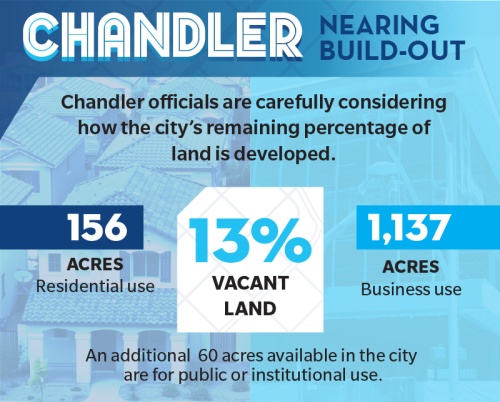 As the city of Chandler approaches build-out, officials say more than half of the remaining 13% of vacant land is zoned for commercial, office and industrial use—and they say they largely hope to keep it that way despite an ongoing push from homebuilders to occupy some of those vacant spaces.

Kevin Mayo, the city’s planning administrator, said Chandler intends to remain true to the general plan that was ratified by voters in 2016 and delineates what percentage of the remaining parcels are zoned for residential and employment. Those remaining parcels are largely located in north, west and south Chandler, with about 70% of what is left in the city overall in south Chandler.

“[The general plan] maintains the city’s competitive position to have a place for the businesses of tomorrow,” Mayo said. “We want to maintain the ability to recruit those emerging companies, and to do that we need to have the space for them.”

Mayo said when determining what future projects to approve in the city, council members and staff look to the vision set forth by councils in the past and reaffirmed over the years.

“For 20 years, city councils have maintained this vision to preserve employment areas,” Mayo said. “When we look at the city today, what we need to do is turn and look backwards and ask ourselves if we like where we are.”

But Mayo said it has not always been easy for the city to hold its ground on keeping housing developers at bay in some of these areas.

“In the early 2000s there was a lot of pressure to convert much of the Price corridor to single-family housing,” Mayo said. “Builders would say that we could never use that much land for employment. To council’s credit, they didn’t amend those guiding documents, but if they had, we wouldn’t have had that space available for Northrop Grumman and what you see at Price and Willis roads, that level of employment and economic growth wouldn’t be there if that vision wasn’t maintained. … That vision has brought Chandler to where it is today.”

Mayor Kevin Hartke said the attempt to preserve room for employment growth in the city is why Chandler continues to attract and retain businesses and industries.

“As the city approaches build-out, it becomes even more important to preserve the remaining land that is planned for creating employment,” Hartke said. “This will ensure the future growth of the city, provide for job creation, and help Chandler remain competitive in attracting new industry and emerging technologies.”

Micah Miranda, the city’s economic development director, said he is seeing a “heavy demand” for industrial and office product in Chandler that he said is being driven by a strong workforce and great schools.

“Our need and prospect numbers are very strong; we are seeing a record number of prospects, and more than 80% require existing building products,” Miranda said. “If we don’t have product to show them, we aren’t able to show them we can meet their needs. We have to make sure there’s enough building space available.”

Miranda said that ensuring Chandler has a healthy economy is directly tied to the balance of jobs to residents in the city.

“Businesses really drive the economic vitality of a community; without them there wouldn’t be housing or retail locations,” Miranda said.

The city has five employment corridors: west Chandler, Price corridor, uptown Chandler, downtown Chandler and the Chandler Airpark area. Of the city’s remaining parcels for development, Miranda said the majority are in south Chandler, which officials consider to be everything south of Loop 202.

Miranda said Chandler’s employment corridors are home to 1,937 businesses and 91,140 jobs, which represents about 78% of all jobs in Chandler. Mayo said those figures are why the city never wants to become a “job exporter.”

“We want to import people into our community during the daytime for employment reasons because we find that people will spend money in the city they work in on lunch and retail as they travel back home,” Mayo said.

Mayo said single-family homes end up being a “net negative” for the city, whereas businesses bring in revenue to cover the cost of residential.

“For every dollar of taxes the city gets from residential housing, it costs more than that to pay for the city services that they use,” Mayo said.

Officials said about 36% of Chandler’s tax revenue comes from commercial, and since the city is nearing build-out, the city does not expect those figures to change by much.

Building and moving to Chandler

While the city’s general plan outlines an effort to maintain much of the land in north, west and south Chandler that is zoned for employment use, there is potential for exceptions in parts of the city where officials see more opportunities for residential developments.

Mayo said rezoning is a “fluid process” in Chandler and when proposals come to the city from developers for land intended for employment use, those developers find out early on if they are likely to be approved or denied.

“We’ve had applications over the years of propositions for Price corridor to do multifamily homes or something and they don’t go forward,” Mayo said. “They found out in real time if that dog is not going to hunt, and then they withdraw.”

Mayo said the denied applications are especially prevalent around the Price corridor and the airpark area. But, Mayo said, there are some instances where developers can get their projects through the rezoning process.

Reed Porter, the owner of New Village Homes, a Gilbert-based home company specializing in the construction of single-family homes in the southeast Valley, is hoping the council will make an exception for about 13 acres of commercially-zoned land in east Chandler to be converted into a single-family home subdivision.

“I know Chandler has stated they don’t want to give up land that has been set aside for employment use,” Porter said. “Usually homebuilders aren’t looking (industrial) parcels. But in my case, we are asking for a rezone from commercial to residential. Commercial is typically a part of residential areas and would more easily lend itself to being rezoned.”

Porter hopes to develop just over 13 acres at the southeast corner of Riggs and Lindsay roads for a housing community called La Valencia. The area is currently zoned for commercial use but rezoning the area for residential use has not yet been approved by the Chandler City Council.

City planning staff supports the request and on Sept. 4 the proposal was approved by the planning and zoning commission and will move on to an upcoming city council agenda for a vote.

According to planning documents, staff supports the request citing that the property has been entitled for commercial development for 20 years and has yet to develop due to “insufficient” traffic and population counts.

Mayo said the La Valencia project is a candidate for rezoning because while the land was planned for retail when the city was planning retail on corners near housing developments, the city learned that was not working in all areas.

“There just aren’t enough rooftops to support retail in some areas,” Mayo said. “The [La Valencia]  land was zoned commercial back when the area was growing, but there aren’t a critical mass of homes there, so the commercial never came.”

Porter then stepped in with a plan to turn the vacant land into a housing development, which he said he saw a need for in the area.

He said Chandler has been a “premier community” which has attracted employers and builders alike in the last 25 years.

“Chandler has been a successful city at attracting employers,” Porter said. “They have a terrific track record and need to have space for those people and businesses that want to come in. Other cities in Maricopa County are probably envious of Chandler’s track record.”