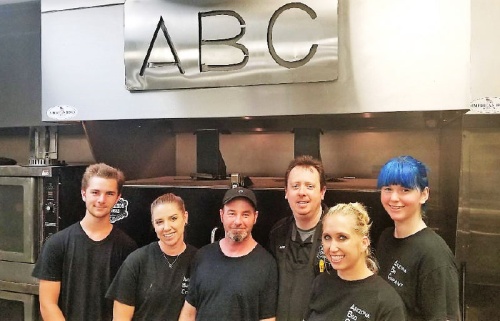 Mark Nichols [fourth from left] and his staff take great pride in service and quality food at Arizona BBQ Company.

Mark Nichols has a different take on the traditional barbecue process.

First, he’s not getting up before the sun with the other pit masters, and second, Nichols is finishing the smoked meats off in a mirepoix-based braise—chopped carrots, celery and onion.

“That’s the French classic cuisine I was trained in,” said Nichols, a Gilbert resident who attended the famed school, about his process. “Smoke only penetrates the meat up to 140-170 degrees, and then you are just slow-cooking. So stop after six hours, hit that mark, put it on a bed of mirepoix, [and] seal it up so it really holds the moisture in and breaks down the fat.

Nichols’ style is one that would probably make most barbecue purists shake their heads. The meat is traditionally smoked slow and low for 15 hours. Putting it on a bed of chopped carrots, celery and onions is unheard of.

The returning patrons certainly are not mad with the result or the portions brought out to the rustic dining area. As Arizona BBQ starts its third year—it opened Sept. 20, 2017—the product continues to evolve.

The meat, especially the brisket, has a different, softer texture than meat cooked for upwards of 20 hours, Nichols said.

“When you aren’t cooking it for 14 to, sometimes, 20 hours, depending on the size of the brisket, it’s a more moist style of cooking,” said Nichols, whose wife, Collette, takes care of the administrative side of things.

That style has created a loyal customer base through word-of-mouth, Nichols said. The restaurant has barbecue staples plus Nichols’ creations.

The business has held its own despite about 20 new restaurants opening within 3 miles of the location. That has not stopped the success that has come in a short time.

Nichols worked as a corporate chef and then had a catering business that started in 2010. He has found the move to a concrete location, where he can still cater out of the back and serve quality barbecue in the front, has worked out well.

“We are expecting a pretty big year three,” Nichols said. “The brisket and ribs are the key components to our success. The Pig Mac gets a ‘wow’ factor, and so [do] the portions. If you go away hungry from here, there’s something wrong.”