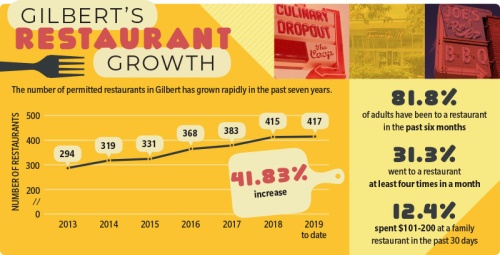 The number of permitted restaurants in Gilbert has grown rapidly in the past seven years.

Gilbert’s development efforts have led to an influx of one notable amenity: restaurants. Since 2013, 123 full-scale restaurants, fast-food joints and other dining locations have opened up shop in town, according to Maricopa County records.

As restaurants continue to move into Gilbert, some have said the town is becoming a “foodie destination”—a place regional residents visit just for the food it offers.

“[Restaurants] are a huge asset for us, especially in places like the Heritage District,” Gilbert Tourism Administrator Glenn Schlottman said. “The thing that has proven so valuable in the district is the uniqueness of those restaurants.”

Through development efforts over the years, Gilbert has encouraged many dining locations to stake their claim in the town, helping shape it into the destination it is today.

The demand to justify that growth appears to be there. According to restaurant market potential data from data analytics firm Esri, 12.4% of consumers in town spent $101-200 at family restaurants within a month, a market potential index of 132. An MPI of 100 represents the U.S. average.

Additionally, 4.7% of consumers spent more than $201 at fast food restaurants in a given month, an MPI of 152.

However, some speculate growth in that sector of the town’s economy will start to slow. Such skeptics have said Gilbert needs to focus on developing other amenities as the restaurant scene may become oversaturated.

For its part, the town is determined to bring in different resources to offer to both residents and visitors—but not at the cost of slowing the restaurant growth.

In the present, the explosion of restaurants has opened employment opportunities and patron spending, all with the support of town officials.

Seeing the value of its restaurant market, Gilbert is making an effort to continue to develop it and attract more visitors to the town.

“It’s a big focus of ours, especially in the regional market,” Schlottman said.

Schlottman said he wants people to make the 20- or 30-mile trip to Gilbert to experience the food it has to offer.

So far, data indicate Gilbert is having success in bringing visitors to town. In fiscal year 2017-18, Gilbert made $224 million in visitor spending, a $14 million increase from the previous year, according to the town.

Steve Chucri, president and CEO of the Arizona Restaurant Association, said the success of Gilbert’s restaurant sector is indicative of a larger trend in the Phoenix area, with the whole of it becoming a dining destination.

“I think, collectively, all the [cities] in Maricopa County have made us a foodie destination,” he said. “I think it’s not any one city—I think it’s all of them together.”

Part of what helps Gilbert stand out is its ability to offer a variety of different food options, according to Craig DeMarco, owner of Postino Wine Cafe and Joyride Taco House, both of which have restaurants in the Heritage District.

The food is becoming more well-rounded, DeMarco said, and as more restaurants open in Gilbert, those choices are continuing to expand.

In addition to the variety of the food, the high standard of quality common among the restaurants sets the town apart, DeMarco said.

“There’s an element of quality throughout the whole [town],” he said. “The bar is very high. New restaurants coming in have to meet those expectations.”

The town’s ability to attract diverse, high-quality restaurants provides incentives for tourists to visit Gilbert, according to Schlottman. The revenue the town earns from these visitors also benefits Gilbert’s residents.

“What the visitors can bring in revenue in spending will benefit the residents to have those amenities,” Schlottman said.

Schlottman said the demand for development in the town is growing. As more restaurants come in and tourism grows, he said the town is able not only to sustain those restaurants, but develop more amenities as well.

But some people are skeptical that the growth will continue.

Chucri said he thinks restaurant development in Gilbert is going to begin to slow down. He said the town has seen impressive growth, but it needs to be strategic moving forward so as not to stall out on its success.

“I think [Gilbert’s restaurant industry is] going to slow,” Chucri said. “They’ve had so much growth that it’s hard to replicate that.”

DeMarco agrees the town is nearing its peak in terms of what it has to offer with its restaurants. He said Gilbert needs a more diverse range of development.

“Gilbert is running out of [dining] opportunities,” DeMarco said.

Gilbert Economic Development Director Dan Henderson said the town is, in fact, looking to attract assets like retail and office space. However, he said he does not want the development of those amenities to come at the cost of reducing additional dining options in the town.

“We’re not focusing at this point on, ‘What do we want less of?’, but on, ‘How do we continue to create an environment where these trade areas can thrive?’” Henderson said. “I don’t see any big changes in our zoning that [say] no more restaurants.”

Schlottman said he thinks the restaurant scene will continue to grow. He said as dining continues to develop, other amenities will naturally move into town.

“When we start talking about districts like the Heritage District, obviously, those are hubs for restaurants, and will continue to have growth within them,” Schlottman said. “But just like any great place to live, you also have those small shops that come up within the block.”

Regardless of what the future holds, it is hard to understate the impact of the restaurant scene on Gilbert today. More than one hundred restaurants have opened in the past five years, with accompanying job growth and spending.

“It’s as though someone waved a wand, and that town just continued to grow,” Chucri said.

The pro-development environment Henderson and town officials have created has attracted many entrepreneurs into the town, including DeMarco.

Before opening his third location of Postino in 2012, DeMarco said he drove around the East Valley for hours looking for a place he thought would suit the restaurant well. He said he was intrigued by the vision Gilbert officials created.

“Gilbert had the most residential and civic pride and feelings that we thought [would make] Postino’s successful,” DeMarco said.

DeMarco said town officials were very supportive during the process of opening Postino East, and they continue to play a significant role in the success of all of Gilbert’s restaurants.

“The town of Gilbert and the members of the Town Council and economic development team have a big stake in making sure we’re successful,” he said. “They’re constantly looking through a lens of improvement.”