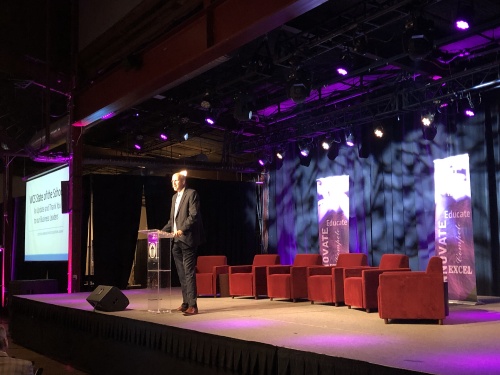 School officials in Williamson County addressed a crowd of business and community leaders Tuesday, Sept. 17 at a State of the Schools at the Factory at Franklin.

The annual Education Summit, hosted by Williamson, Inc., focused on technology and entrepreneurship opportunities in schools as well as updates on each school district’s accomplishments and future plans.

Superintendents from both Franklin Special School District and Williamson County Schools spoke at the event, as well as technology specialists from schools across the county.

Director of Schools David Snowden said the 113-year-old district in the heart of Franklin is focused on educating the whole child, including social and emotional intelligence.

“Our vision is excellence in teaching and learning for all,” Snowden said. “That means all students, all adults, that’s what we strive to achieve.”

He said 69% of teachers in FSSD have a master’s degree or higher, and that the board has 63 years of experience combined. FSSD is a highly diverse district, according to statistics presented by Snowden.

About 40% of students receive free or reduced lunch, according to the presentation. Nearly half of students are from racial minorities, and 32 languages are spoken by students in the district.

He said that mental health, emotional support and student well-being are important topics in FSSD, and that the district now has a therapy dog in training.

The district is also “dabbling” in technology pursuits, including STEM-related curriculum and coding, he said. Snowden said that is in response to the changing economy, since Tennessee employers are looking for talent with STEM and coding skills.

During the technology panel, Patty Littlejohn, who is a STEM teacher at Freedom Middle School, said the district needs mentors for STEM students, as well as judges for competitions and funding assistance.

“We need mentors who can come into our school and help solve problems that we’re having trouble with,” Littlejohn said. “Or even telephone numbers of people who can help us.”

In December, the district is sponsoring a regional STEM competition for schools from Kentucky, Tennessee and Georgia, Littlejohn said.

“Last, but not least, it takes funding,” Littlejohn said. “Our school district works so hard.”

WCS superintendent Jason Golden began his keynote by thanking Williamson, Inc. for its support for increasing teacher pay across the district. The county commission allocated more than $12 million to teacher pay for the 2019-20 school year, including a raise for new teachers.

“We made a big change, and I want to thank you for that,” Golden said. “We took a really big step.”

Students across the district achieved beyond the state average in both English-language arts and mathematics, he said.

“I do believe that in Tennessee there is a rising tide.” Golden said. “I do believe that all those ships across the state are going to continue to go up as we improve our services to students across the board that Dr. Snowden mentioned, but I can’t help but brag on what we’re doing here, and it is because of who came before us.”

In addition to excelling in traditional classes, Golden said 55% of high school students in the district are enrolled in a College, Career and Technical Education course. About on-third of 2019 seniors graduated with a focus on CCTE electives, he said.

Some of those options for students include specializations in education; finance; STEM; marketing; medical sciences; architecture and construction; and hospitality and tourism.

“One of the things that’s neat, that I think we need to be working to dispel the myth across the state is, career-technical education is professional education,” Golden said. “It’s not that old stereotype from 50 years ago of [vocational] tech.”

Golden also noted the growth in the county, which leads to needs in construction, staffing, funding and other challenges. The district currently clocks in at about 41,000 students, and he said an average of one new school will open per year for the foreseeable future. WCS hired 410 new teachers this year, he said.

“That growth is coming, and it’s continuing to come,” Golden said. “It’s a challenge for us.”

Bus drivers are needed as well, he said. He asked the room of business leaders to keep that in mind for retired acquaintances and others.

“If you know somebody who’s retired, somebody who’s thinking ‘I want to do something good,’ you can get up early, run around, play a round of golf in the afternoon and get back to driving the bus as school lets out,” he said.

Golden also said that educators in the county and around the country are concerned with students vaping, or using electronic cigarettes, and becoming addicted to nicotine. The district recently put out a public service announcement in conjunction with the sheriff’s department.

“We’re covering the scope of our student needs in Williamson County,” Golden said.