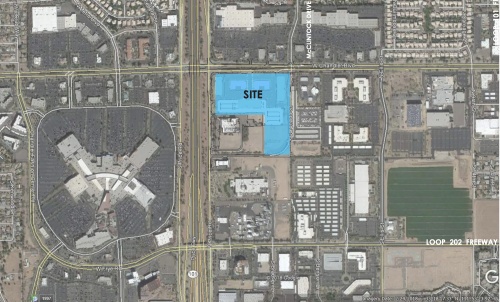 A vacant 20-acre plot of land at the southeast corner of Price Road and Chandler Boulevard will soon be home to a mixed-use complex after the Chandler City Council voted to approve a rezoning resolution Sept. 12 for a project dubbed "Chandler 101."

Council approved a resolution rezoning the 20.3 acres near Chandler Fashion Center to include a mid-rise overlay for a mixed-use office park with commercial land uses, a potential hotel and a future multi-family residence, according to documents attached to the meeting agenda.

The developer, VanTrust Real Estate LLC, calls the project "Chandler 101," and at this time, only conceptual figures have been provided for the land use, according to city documents.

"Chandler 101 is designed to respond to [Chandler's] increasing need for Class-A office space developed within a high-quality, mixed-use, campus-like setting," reads an analysis of build-out from the developer in city documents. "Today's top-notch employers are no longer seeking standalone office complexes that require off-site travel for basic service or out-of-office meetings."

The northern portion of the L-shaped property is planned to have two to three office buildings and a potential hotel and retail space flanking the main entrance off Chandler Boulevard, according to the documents. The southern portion of the lot is planned for a multifamily development or for commercial use—or for both. According to city documents, the two parts of the development would be connected via a pedestrian "linkage" along the western edge of the east office building.