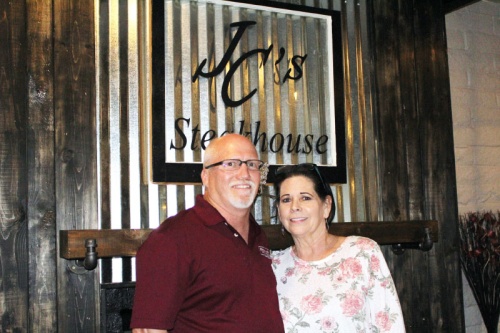 Dennis Petty and Diana Blewer are the husband-and-wife team behind JCu2019s Steakhouse. The initials come from their fathersu2019 names.

When Dennis Petty, then owner of the Groves Bar and Grill, saw the building for lease at 25 E. Ray Road in Gilbert, he said he was just curious to check it out.

“I looked around and said to myself, ‘I could do something with this place,’” Petty said.

Petty mentioned it to his wife, Diana Blewer, who he said initially rejected the idea of opening a steakhouse at the location. Despite this, the couple signed a lease in September 2014 and opened JC’s Steakhouse for business in December.

Petty and Blewer said they wanted their new endeavor’s name to signify what was most important to them.

“We decided to pay tribute to our dads,” Petty said. “They’re the ones who gave us our work ethic and taught us what we know today.”

Petty, the executive chef, said he learned much about cooking from his father, who was on the board of the National Chef’s Association. Petty has worked in several restaurants serving Mexican food, American cuisine, pizza and baked goods.

Blewer comes from a corporate background, working at cash registers with her father as early as age 7, she said. She now does the bookkeeping for JC’s, but also hosts, bartends and occasionally works the line with Petty.

When they first opened, Petty and Blewer said they were told they would never make it as a steakhouse in the community. Petty said their biggest challenge has been being a mom and pop restaurant and competing with other corporations serving steaks. After almost five years, though, the business is still running.

“What we’re most proud of is that we’re still here,” Petty said.

The couple said that, although difficult, being a family-run business is what makes it unique. They said their customers are not just their clients, but they become family once they start eating at JC’s.

“A lot of people are driven by the almighty dollar,” Blewer said. “[But] we’ve made so many friends and met so many wonderful people, and that’s what keeps us going.”