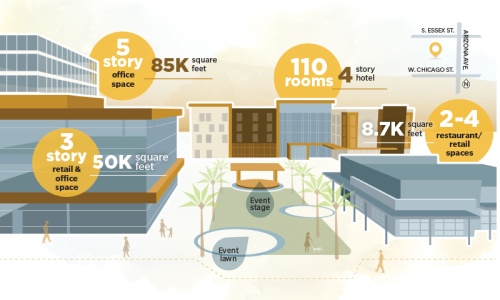 The city’s vision for downtown Chandler is one of an urban feel with more event space—and much more square footage in the entertainment district, according to officials.

On the heels of the Overstreet development debut last year, city officials say the New Square development set to open this fall brings that vision one step closer to reality.

While New Square, positioned south of the historic square, and summer construction on Arizona Avenue are the city’s latest steps toward a sprawling downtown, city officials hope the downtown expansion will continue. The goal is to develop the southern blocks of downtown and the areas on the east and west sides of Arizona Avenue to further expand the entertainment district.

“It’s the perfect blend of new and historic—or ‘hip-storic,’ as I’ve coined it,” Mayor Kevin Hartke said. “New development brings new life and opportunity to an area, and I look forward to this chapter of our downtown.”

New Square will be home to a 50,000-square-foot, three-story office building; a Hilton hotel; a stand alone multitenant office building with 9,000 square feet of restaurant and retail space; event space; green space and retail space—some of which will open as soon as this fall. Meanwhile the city is constructing a parking garage with more than 900 spaces.

“We are moving from a suburban, sleepy little downtown to more of an inviting urban environment,” Moyers said.

Moyers said plans to develop what will now be the New Square area have been in the works for more than 30 years—as has the plan to expand the downtown entertainment district along Arizona Avenue from north of Chandler Boulevard to Frye Road.

“New Square really is kind of that bridge that makes this continuity between the historic and the new,” Moyers said. “Our historic square is a real gem for our community. It is where Chandler was founded; it will always play an important [role]; but as we continue with retail patterns changing, it was important that we add the elements of an urban downtown in order to make our downtown survive.”

A 110-bed Hilton Garden Inn will open in the spring, and Lawrence expects businesses will begin occupying the other completed spots in the first quarter of 2020. Great Western Bank, a regional bank based in South Dakota, will lease 12,000 square feet of space in the three-story office building. The ground floor of that building will also house the new location for DC Steakhouse, which has sat in the historic square for nearly a decade.

A single-story 8,700-square-foot retail space will also be among the parts of the project completed this fall. Lawrence said he is negotiating with about a dozen other businesses to occupy space in the single-story building and expects leases to be signed for the remaining space in Phase 1 of New Square soon.

Lawrence, a Chandler resident and longtime supporter of local businesses, said he hopes New Square ultimately highlights what is special about downtown Chandler.

“There’s just a lot of local pride in what we are doing here,” he said. “These are local, mom and pop restaurant developments. And that’s what makes Chandler special. There’s rich history.”

For Anthony Canecchia, owner of SanTan Brewery located in the historic square of downtown, the changes in the area, particularly the New Square development, are encouraging.

“There will always be some inconveniences with any development, but we are encouraged by and excited about the city’s ongoing investments,” Canecchia said. “Chandler has been patient about its growth, and I think it shows in the quality of life in the city. My partners and I have always seen additional growth in downtown as complementary to our work. We can all share the common goal of providing our community with businesses that they are proud to patronize.”

When Canecchia started SanTan in 2007, he said Chandler was on the verge of a resurgence of redevelopment, which is part of what initially drew him to the area—that, and he wanted to be next door to other local business owners.

“We host five breweries, two distilleries, six amazing cocktail spots, a community stage that is large enough to host national acts, the West’s largest barbecue festival, [with] more to come,” Canecchia said. “There is no other downtown similar to Chandler.”

Other past and future projects

New Square is the tip of the development iceberg, Moyers said. The Overstreet development, a more than 77,000-square-foot, mixed-use development and home to Flix Brewhouse, opened last year on the corner of Chandler Boulevard and Arizona Avenue.

Overstreet hosts retail, restaurant, entertainment, office and fitness space and a 350-spot parking garage. Revint Solutions, a revenue recovery and consultation business for health care providers, now occupies the entire second floor at Overstreet—about 18,000 square feet—after having moved its regional office from another Chandler location. Over Easy, a breakfast and brunch spot, will also be at Overstreet as will Screamery Ice Cream, Truland Burgers & Greens and ShareTea.

In the coming year, work will begin on a roughly 250-unit apartment complex, called DC Heights, at the southeast corner of Commonwealth Avenue and Dakota Street, according to city officials. Plans for DC Heights also include some retail space, according to city documents. And, directly across from Overstreet, developer LGE has a 42,500-square-foot, mixed-use building in the works, though a timeline for that project was not immediately available.

The city’s plan includes developing farther south, too, Moyers said. Businesses such as The Sleepy Whale, which is a craft beer bar and bottle shop; Gadzooks Enchiladas & Soup, an eatery focused on enchiladas and other Mexican-style food options and Flo Yoga & Cycle are just a couple of the different spots that have so far ventured farther south on Arizona Avenue.

“We know that redevelopment will take time,” Moyers said. “But we have seen projects that are starting to take hold in that area.”

Mary Murphy-Bessler, Downtown Chandler Community Partnership president and chief executive, said a downtown is important in that it “defines the character of the community.”

“It is an economic engine,” Murphy-Bessler said. “Chandler is incredible in terms of investing in their downtown. I have been so impressed with their fortitude and their long-range planning, and I think [with] that investment, [the city] provides a really great environment, not just for the businesses, but for the citizens. Citizens want to come downtown. It creates such a wonderful sense of place.”

Murphy-Bessler said the reinvestment in existing buildings—like Civic Market and Hidden House—in addition to developments like Overstreet and New Square show there is a lot of promise.

“When you see reinvestment and new developments happening equally, when those two are working side-by-side, you really see a significant change in your downtown,” she said.

City staff said changes to downtown are still in the early phases. “Redevelopment is a marathon, not a sprint,” Moyers said. “There is 100-plus years of infrastructure in place, and redevelopment is difficult; it takes real commitment to want to be a part of what we are creating.”

Construction completed on Arizona Avenue in August was also a key piece, Moyers said. I

mproving roadway and streetscapes on Arizona Avenue between Frye and Pecos roads was part of  a larger vision of enhancing the downtown core’s pedestrian-friendly feel, Moyers said.

To do that, the city spent $6.1 million to raise the median and enhance the paving at crossings, Moyers said. The city also added in new place marker signs for Downtown South to give a name to the region from Frye Road to Pecos Road. Moyers said that area was always part of the downtown redevelopment plan, and she hopes that by giving the area a name that includes “downtown” in it, things will organically redevelop.

The city has also been purchasing property along Washington Street to the south to connect to Pecos to provide another access point into the downtown area from the south, Moyers said.

With the expansions taking place, the city wants to ensure there is plenty of parking. Once the Oregon Street Parking Garage project is complete, there will be five free 24-hour parking garages downtown, something Moyers said was important to get visitors to spend more time in the area.

“Several businesses have been on the fringes of downtown, and with this new development they are all the sudden in the middle of the downtown,” Moyers said. “Those businesses will see so many more customers.”