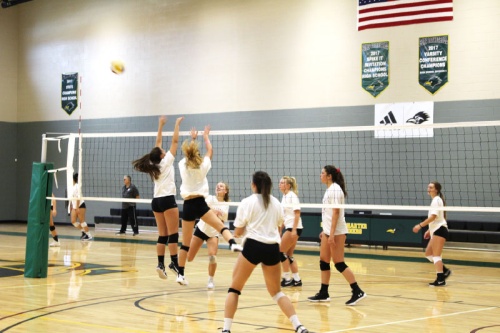 Parku2019s womenu2019s volleyball team started practice in August even before school opened for the academic year.

When Park University opened in Gilbert on Aug. 19 for its first traditional academic year, nearly 300 students walked through its doors—and more than 90% of those students will also compete on one of the 11 athletic teams Park is fielding this year.

“If there’s one thing that keeps me up at night, [it’s the high enrollment of student athletes],” Ehrlich said. “[But] we went into this knowing that was going to be the case because that’s the easier student to recruit. They still want to play ball. It’s the other groups that take a little bit more work.”

The university expects to recruit more students who are not athletes over time.

Using athletics to grow enrollment is not an unusual strategy, experts said. Many smaller, usually private schools that compete on the NCAA Division II or III levels or in the National Association of Intercollegiate Athletics, where Park will compete, have robust athletic programs to attract students.

“Park’s been around for just short of 150 years, and it’s always been about opportunity and access to education,” Park University Athletic Director Steve Wilson said. “When athletics became part of the fold, it was about … opportunity to be a part of something here.”

Park University has 42 campuses nationwide, with its main campus in Parkville, Missouri, in the Kansas City metropolitan area. Most of the satellite campuses are tied to or near military bases, but it also has nine other campuses. Gilbert is considered a residential campus along with the main campus.

Besides the main campus, Gilbert is the first to offer athletics. While Gilbert wanted to attract a university into town as a means to bolster the quality of its work force, according to town officials, officials also encouraged Park  to offer athletic opportunities for area students.

“We saw a need for another option for [area] students that wanted to continue playing a sport that maybe just were a tick behind one that might go to a Division I university,” Ehrlich said. “We saw that as a huge opportunity. I think that was a big part of what drives us. Plus sports are 12 months out of the year here.”

After the Ehrlichs—Donna Ehrlich, Jeff Ehrlich’s wife, is the campus academic director—the next major hire was Wilson as athletic director.

More could come after that. Jeff Ehrlich and Wilson said club sports could start popping up in 2020, and they are open to eventually adding other collegiate sports.

Park’s opening brings more of what have been rare opportunities for students to compete in athletics close to home. Arizona has been a college athletics desert between the NCAA Division I and the junior college level until recent years when Arizona Christian University, then in Phoenix, expanded its athletic department and Benedictine University in Mesa, Ottawa in Surprise and Park began offering athletics.

Having Park open near home was what drew Layni Rodriguez, 17, a recent Mesquite High School graduate who will play on the Buccaneers’ women’s volleyball team.

“I like Gilbert a lot, so it’s nice to be able to stay in the area that I’m familiar with,” said Rodriguez, who will major in fitness and wellness. “I didn’t really have a plan really for college. I was still figuring that out, and then Park opened, and I was like, ‘Oh, perfect.’”

Her teammate, Bree-Lynn Taylor, 18, came from much further—Hot Springs, Arkansas. Taylor had family in Arizona but offers to play elsewhere. Friends told her about a new school opening in Gilbert with athletics.

“It was like, ‘I’ll try it out,’ and so I went online and filled out the recruiting form, and I just did it,” Taylor said. “And then, luckily, it worked out.”

The two are part of a 23-woman squad, which will be divided into two teams through competition. One will be the travel squad that plays other NAIA schools; the other, a “reserve team,” will play a limited, local schedule against junior college or other local NAIA reserve teams.

The size of the teams is one sign of the interest athletics has drawn at Park. The athletes are students paying to get an education, but athletics cost the college money.

“We don’t see it as a drain,” Ehrlich said “It is an expense, but we see it is an expense that makes good sense to the mission and the vision of the university.”

Park is not alone in using athletics as a means to grow its enrollment, according to Scott D. Miller and Marylouise Fennell, who have written books and articles on higher education issues. Miller is president of Virginia Wesleyan University in Virginia Beach, Virginia, and Fennell a principal for Hyatt-Fennell, a higher education executive search firm in Conway, Pennsylvania.

Among their articles, Miller and Fennell co-authored “Adding Athletics to Boost Enrollment” for the September 2015 issue of College Planning & Management.

“These are extremely challenging times in American higher education,” Miller said. “I am convinced more than ever private colleges are looking a lot alike, and the successful institutions are the ones that are differentiating themselves from other institutions.

“What Park’s doing … is setting themselves apart as an institution when there is declining demographic of what has historically been traditional students. I applaud them.”

Fennell said offering sports as you open a college allows students to check one more item off their list.

“Today’s students are much more physical and more intentional about exercise, sports, and I think not to offer it would be bad,” Fennell said. “This is a come-on, definitely. It’s a good way to get them.”

There are additional benefits, too, as the pair point to a Council of Independent Colleges study that showed that member institution students involved in sports had higher retention rates, campus engagement and grades.

Miller said he believes the early surge of student-athlete enrollment will help Park achieve “critical mass,” and that more non-athlete students will come, probably in a five- to seven-year period.

Ehrlich said the college has had many discussions about the needed mix of student groups.

“Something we’ve talked about a lot is. ‘Does any university survive on one distinct group of students, all women or all athletes or all academics?’” he said. “What is that right mix? Right now, we’re out of balance, but we plan to get that in balance.”

To that end Park will add a liaison to the local high schools to boost student recognition of the school. The Ehrlichs and the athletic staff already have spent much of the past year at community events to let people know about Park.

“I believe now we’ve made a pretty good splash in the community through a number of ways,” Ehrlich said. “We’re here now. We’re on the ground. They can walk in a building; they can talk to a faculty member; they can tour a campus; they can watch a class going on. We didn’t have that before.”

The athletes will have opportunities to participate in campus life that goes beyond what traditional student athletes have. Wilson said a basketball player, for example, could be student government president.

“Athletics at most universities is the front porch,” Wilson said. “It’s one of the first things folks look for, and it just so happens that when [a college is] starting, it’s the front porch, the front door, the living room and kitchen. It’s kind of everything right now. We’re going to go past that, and we’re going to continue as an athletic department to be a point of pride for this campus.”
SHARE THIS STORY