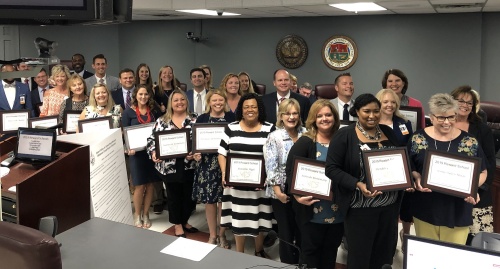 At the first school board meeting of the new academic year, Superintendent Jason Golden announced that boosters and parent-teacher organizations raised over $10 million for Williamson County Schools last year.

That is a 7.2% increase over the previous year’s donations, Golden said. Enrollment increased by 2.9% in that time, he said.

“We only give x amount of dollars to support field maintenance, so they make up the difference there,” Wimberley said. “That’s a pretty good chunk of money.”

The Williamson County Commission cut about $3.2 million from the WCS capital needs budget back in July. One casualty of those cuts was a plan to replace some security cameras at WCS schools while adding new ones in other locations, Golden said.

Some of the replacements will still be made, but the budget no longer contains the full amount needed for the entirety of WCS’s plan, he said.

“We’re going to continue to ask,” Golden said. “For safety there’s no substitute for our [school resource officers] being in the building, but the cameras help locate issues and go back and review issues.”

He said the district will likely request more money next year to fulfill the gap in funding this year.

District officials honored school staff from the record 28 WCS campuses that were named Reward Schools when TNReady results were released earlier this month.

The 28 leaders could hardly fit in the front of the auditorium for a group photo due to so many schools receiving honors.

The district as a whole was named Exemplary by the Tennessee Department of Education.
SHARE THIS STORY