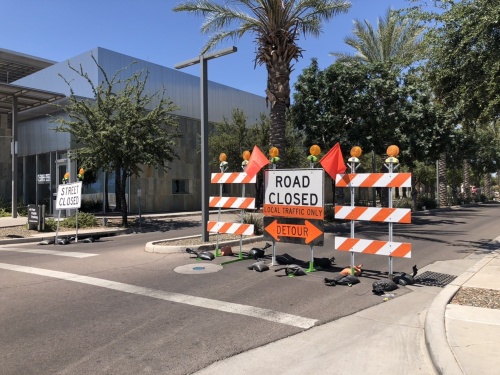 As construction in and around the intersection of Arizona Avenue and Chicago Street enters phase two July 3, new traffic restrictions will be put in place, according to a news release from the city.

East Chicago Street in front of Chandler City Hall between Arizona Avenue and Washington Street will be closed to all traffic. Visitors to City Hall can access Washington Street and the multiple free parking options near the complex using Frye Road or Boston Street, according to the release.

In addition, work on Arizona Avenue will move to the east side. Traffic on Arizona between Frye Road and Boston Street will be directed to the west side, with one lane open in each direction, according to the release.

The road work is expected to be complete in August in preparation for the opening of the New Square development across from Chandler City Hall, which is anticipated to be completed later this year, according to the release.
SHARE THIS STORY