Mother to Mother: Nashville nonprofit distributes baby supplies to low-income families in the area for 15 years 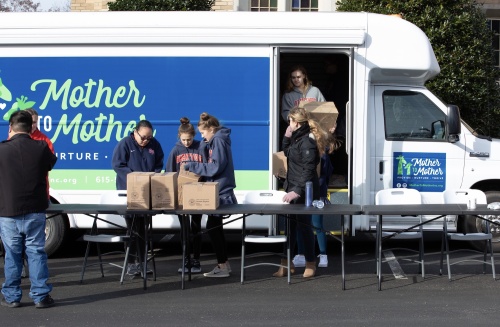 When Nashville resident Janie Busbee established the nonprofit Mother to Mother in 2004, she said she set out to provide essential childhood items to low-income families. After 15 years in service, Mother to Mother is nearing 100,000 families assisted across the state.

What began as a small-scale operation out of Busbee’s home garage has grown into a full-time undertaking at the organization’s new headquarters near Berry Hill, according to Executive Director Jeanine Garner, who began her position in 2017 after volunteering with the nonprofit for four years.

“[Busbee] saw moms helping other moms by recycling used clothing, but she also noticed a huge void that went much deeper than clothing,” Garner said. “Some families go into the delivery room with nothing at all, and that’s what inspired her to start a nonprofit.”

Mother to Mother primarily operates with the assistance of local agencies who identify families in need of supplies. To receive donated items, a family must live below the poverty level of $24,600 in income per year for a family of four, Garner said.

The nonprofit’s three main initiatives include providing families with diapers, car seats and products that allow for safe sleeping.

“A lot of people don’t know that you cannot buy diapers on WIC or food stamps,” Garner said. “There’s no support for that, which means [between] one and four moms have to choose between diapers for their child or children and food on the table … that can become a vicious cycle.”

Mother to Mother accepts donations of strollers, high chairs, toys, school supplies and more. While items such as cars seats, baby monitors, breast pumps and hygiene products must be donated new, the majority of products can be gently used.

“The initial instinct might be to throw something away, but if it’s gently used, there are so many families out there that could use it,” she said. “We don’t have the capacity to help everyone, but our 50 or so agency partners can always connect us with a family in need.”

In November 2018, Mother to Mother launched a rural outreach program to assist more families in need. According to Garner, staff members and volunteers load up the nonprofit’s bus once or twice a month and hand out supplies to families in other counties.

“There is such a great need [in Davidson County] but even more so when you go out to small towns in surrounding counties, especially in areas where there are limited agencies there to help,” Garner said. “It’s our desire that we can grow Mother to Mother to help even more families across the state.”