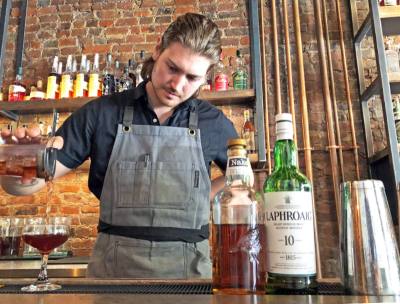 Two of Franklin’s longtime business owners have been working for the past year to create an intimate neighborhood bar and kitchen.

Gray’s on Main owners and managers Joni and Michael Cole opened O’ Be Joyful last May at 328 Main St., Franklin.

“Living here, having a business here, and us loving to go out—all of us—we knew it’s something that downtown Franklin didn’t have,” Joni Cole said. “And that would be a hometown bar where you know everybody’s name … that’s locally owned, and it’s small.”

The business is located next to Gray’s on Main, and like Gray’s, O’ Be Joyful is influenced by Southern tradition and history, Cole said. The name comes from Civil War-era slang meaning homemade brew or liquor.

The menu consists of burgers, such as the Pimento Burger; hot dogs; and elevated twists on bar snacks, such as whole jalapeno peppers stuffed with cream cheese and wrapped in Benton’s bacon.

The bar also features one of the thickest drink menus in town, with about 200 bottles of whiskey, bourbon, scotch and more, including rare bottles such as Pappy Van Winkle’s Family Reserve and Weller Special Reserve, Cole said. Classic cocktails are available, including Old Fashioneds, Manhattans and mint juleps.

Cole said that through her and Michael’s knowledge of what Franklin diners want, they were able to put together the extensive selection of spirits.

“Whiskey now is sought-after, but it’s also an educational journey—and it was for us,” she said. “We had to educate ourselves on whiskey so that we could sell this and be knowledgeable about it.”