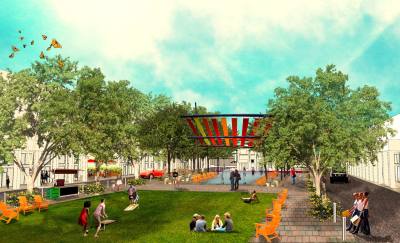 An early rendering shows how the town thought The Commons area might look. The rendering was made before Gilbert Town Council selected a developer.

Gilbert has selected a developer for 9.1 acres of town-owned land at the north end of the Heritage District and will sell the lot if Town Council approves at its May 15 meeting.

If approved, the development of the site will begin bringing the latest Heritage District redevelopment plan to life. Council approved that plan last August, and the 9.1-acre site is one of three sites identified as being core redevelopment areas.

The plans from the selected developer, Heritage North Partners, check off items that were on the town’s wish list for the “north anchor," including a boutique hotel and office and retail space. The plan also calls for multifamily housing and two parking garages, one to accommodate residents and the other for businesses and the hotel.

The proposed agreement also has the developer start work on two amenities for the district: The Commons, a 15,000-square-foot open space area that can be used for public events, and the north end of The Paseo, a north-south passage through the district that would be restricted to pedestrians and bikes.

In addition, it calls for improvements along the Western Powerline Trail, including spending no less than $150,000 on public art for it.

The developer and town have agreed to a process to determine a fair market value for the lot, according to town documents, but the minimum purchase price has been set at $5.33 million.

Heritage North Partners was selected through a request for proposals process the town conducted. The town owns about 56% of the land in the Heritage District, and town officials have said they intend to use their ownership to leverage bringing items to the district the town wants to see there.