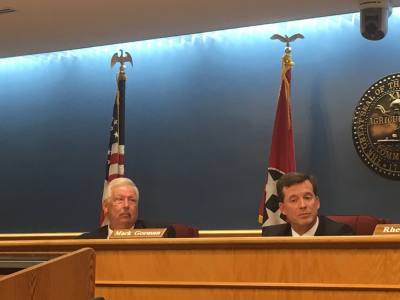 Vice Mayor Ken Travis (left) led several rounds of voting that did not result in the appointment of a new mayor during the May 13 meeting.

After several rounds of voting that did not result in a majority during its May 13 meeting, the Brentwood City Commission has opted to postpone the appointment of mayor.

While registered voters choose which commissioners will have seats on the board, the mayor and vice mayor are appointed for two-year terms by the board following each May election. The commissioner who wishes to be mayor must receive at least four votes from his or her fellow commissioners, according to City Manager Kirk Bednar.

Vice Mayor Ken Travis, who was appointed during the meeting, led several rounds of voting that resulted in a stalemate, with no commissioners choosing to change their votes.

"This has ceased to be funny," Commissioner Anne Dunn said during the meeting. "I've sat up here 29 years, and I've never seen a farce like this."

While the idea of taking a recess was suggested, commissioners said they wanted to avoid the appearance of suspicious activity and make their decision in front of the public.

Deanna Lambert, communications director for the city of Brentwood, said there is no alternative method for the city to choose a mayor.

The commissioners ultimately voted to table the item until the commission's first meeting in June, which is currently slated for June 10.
SHARE THIS STORY