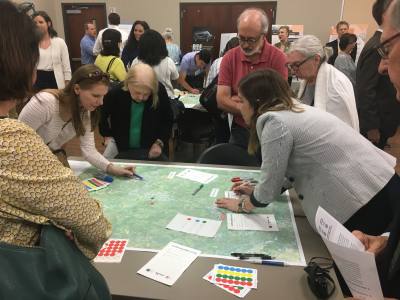 Residents are invited to attend public meetings to identify where future projects could go.

To help combat increasing commute times, officials from six cities—including Franklin, Brentwood and Nashville—and three counties are partnering with local and state agencies to find alternative modes of transportation. The South Corridor study kicked off in late April and early May with a series of public meetings to find what alternative modes of transit residents would be interested in utilizing in the area.

Officials are working with consultant WSP USA to develop the study, which will examine three routes in the south corridor area: I-65, Franklin Pike/Road and the CSX railway. The study area will span from Maury County through Williamson County and into Davidson County, just south of downtown Nashville.

According to Doug Delaney, a senior planner for WSP’s Nashville office, based on current estimates, Nashville residents could see as much as a 113% increase in time spent driving in the next 20 years.

“The Middle Tennessee area and this corridor are experiencing a lot of growth, and that growth is going to continue into the future,” Delaney said. “By 2040, we’ll have 76% more people, which means 86 percent more local volume, a lot more jobs, and as you can imagine, that means we’re going to potentially spend a lot more time driving or stuck in traffic.”

According to study documents, single-occupancy vehicles make up more than 80 percent of traffic along these corridors, contributing to the congestion problems in the area. To help take some of the cars off the road, the study will focus on identifying alternatives for commuters as well as public transit options.

“We’re looking at how we can utilize those corridors to move people better throughout these three counties,” Delaney said. “We are looking at a number of transportation solutions that might be possible along this corridor—everything from bus to light rail to commuter rail, even into monorail or some other potential solutions. In addition to transit solutions we’re also looking at how can we use technology, even some technology that’s just emerging now to improve traveling the corridor.”

During the public meetings, residents were able to examine case studies from other cities that have utilized mass transit and urban rail, such as the Austin MetroRail, the Minneapolis NorthStar Line commuter train and the Atlanta MARTA rail system, among others.

Study officials are expected to host another series of public meetings in June and July to identify what residents would prefer in an alternative transit plan and will begin developing project recommendations this fall, according to Delaney.

While a project cost estimate or funding source for south corridor improvements have not yet been determined, funds could be raised through public/private partnerships, state and federal contributions or a tax increase approved by voters, according to the study’s website.

The study is expected to wrap up in October. Delaney said the priority for this summer will be to compile public feedback to find what residents would like to see in the study results. While the first round of public meetings has wrapped up, residents can still provide feedback through the study website, www.southcorridor.org.

“We’re going to do a lot of work over the next several months, but we want that work to be informed by [residents],” Delaney said. “That’s information that’s going to help us; as we plan this corridor we really are looking for [their] input to help make this the best study and provide the best recommendations for what [they’re] interested in having in this corridor.”

For residents looking to learn more about the study, additional public meetings will be held May 2 at 5:30 p.m. at the John P. Holt Brentwood Library at 8109 Concord Road, Brentwood, and on May 6 at 5:30 the the Adventure Science Center at 800 Fort Negley Blvd., Nashville.
SHARE THIS STORY