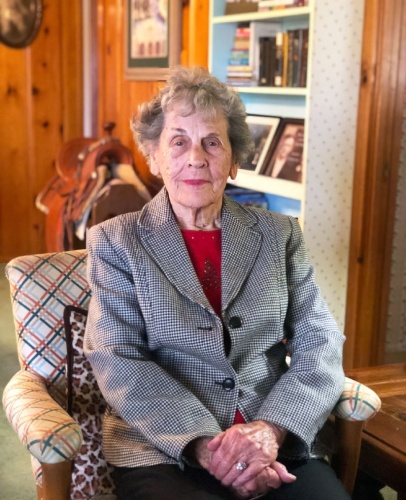 June Morrison, shown here in her living room, has lived in Gilbert for 94 years.

Gilbert is Arizona’s fastest growing community, but few have seen the town transform the way June Morrison has.

“I remember when it was all farmland,” Morrison said. “At one time, Neely Street was the boundary of Gilbert. Can you imagine that?”

Born June Neely, Morrison moved to Gilbert with her family from Texas in 1924 when she was less than a year old. Like almost all residents at the time, the Neely family went into the agriculture business, eventually settling on a plot of land near Cooper and Elliot roads in 1931.

A large portion of the 200 acres the Neely family once owned at that location has been sold to homebuilders, but Morrison still lives in the house she grew up in and the one she raised her three sons in.

It’s located less than a mile from downtown.

“Home base was right here,” she said.

Living so close to the center of things, Morrison has had an up-close view of the way the tiny town has swelled to become the vibrant suburb it is today.

“There was only one block, really, of town,” she said. “And then little by little it got to be two.”

A drugstore, three grocery stores, a lumber yard and two service stations were among the early merchants in town. For a short time, she remembers a bank. The expansion of the U.S. 60 highway was something that really helped boost the population, Morrison recalls.

“There were only 18 in our graduation class,” she said.

Among her classmates was her future husband Marvin, whom she met in fifth grade. The two had a connection almost immediately.

“In sixth grade he put a heart on his hand and put our initials in it,” Morrison said. “My name was Neely and his was Morrison and it was alphabetical so I sat behind him, and I said, ‘I’ve been behind him my whole life.’”

June and Marvin married in 1944. Like his wife, Marvin came from a family of farmers and he went into the family business after returning from World War II, growing cotton, corn, and alfalfa on the land that has since become the residential community known appropriately as Morrison Ranch in east Gilbert near Elliot and Higley roads.

Much has changed in the near century since June Morrison has lived in Gilbert.

Morrison thinks the ever-booming town might finally be nearing capacity.