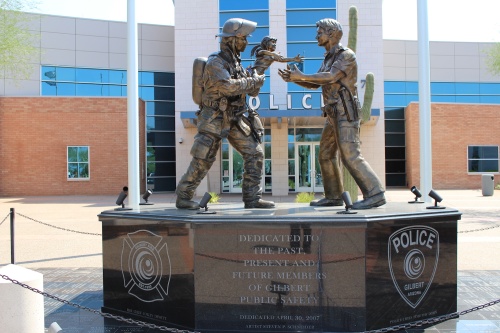 Gilbert officials look like they will get the public safety training facility they asked for from voters.

With 32 percent of the vote counted Nov. 6, Question 1 on the bond was getting 2-1 approval from the voters.

The approval allows the town to sell $65.35 million in bonds, which along with a nearly $20 million sale of land and possibly some general fund money, will underwrite the cost of the $85 million facility planned near the northwest corner of Power and Pecos roads.

Gilbert historically has trained its police officers and firefighters at neighboring cities’ facilities, but with Gilbert’s force rapidly expanding and other cities needing their own facilities for their growing needs, the town was being crowded out, town officials said.

Gilbert further argued that up to 85 percent of its public safety forces were going to be eligible for retirement in the coming five to seven years, underscoring the increasing need for a facility.

In other races, Republicans could lose one legislative spot among the six in districts 12 and 17, which serve Gilbert.

In the Legislative District 12 House race, Democrat Jennifer Pawlik leads Republican Nora Ellen by fewer than 200 votes with 42 percent of the vote counted, making it possible that a single Democrat could claim victory. District 12 serves mostly Chandler but has part of Gilbert in its boundary.

Republicans led all the other legislative races in the two districts.

Republicans also led all the statewide races for executive positions, while Republican Martha McSally and Democrat Kyrsten Sinema were neck and neck for a U.S. Senate seat.

In the Chandler USD board race, Robert Rice, the only incumbent running, trailed Lara Bruner and Lindsay Love for the two positions at stake. Love led Rice by 4 percent and about 3,500 votes with 44 percent of the vote in.