Park University hustles to prepare for students as opening nears 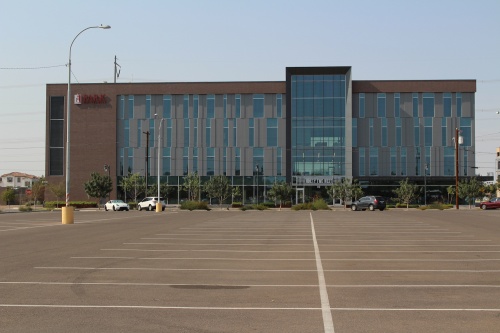 The new tenant in Gilbert’s University Building is busy working to attract potential students while hustling to prepare for its October opening.

The Gilbert campus will be the third Arizona location and 42nd nationwide for Park University, which is based in the Kansas City suburb of Parkville, Missouri. The other two Arizona locations are at Luke and Davis-Monthan Air Force bases. Park has a strong, historic relationship with the military.

Classes are scheduled to begin Oct. 15, which aligns with the university’s Fall II semester. Offerings will be for evening students this academic year.

Park University will have a more conventional calendar with traditional and nontraditional students in the 2019-20 academic year, according to Executive Director Jeff Ehrlich.

Enrollment sits at 12 students with more in the process of enrollment. Ehrlich said the college set a goal of about 50 students when classes start and expects to gain more students in the future. He told Community Impact Newspaper Aug. 30 that the school is on track for meeting the initial 50-student goal.

University President Greg Gunderson sent Jeff Ehrlich and his wife, Donna, the campus’ academic director, who are both experienced with Park University operations, to open the Gilbert center.

Jeff Ehrlich said Park University has received accreditation from the Higher Learning Commission, an independent corporation founded in 1895 as one of six regional accreditors in the U.S. The commission accredits degree-granting secondary institutions, such as Park University in the North Central Region, which includes Arizona.

The Accreditation Council for Business Schools and Programs, which focuses on recognizing teacher excellence in business, determining student outcomes and a continuous improvement model, accredits the school’s business program.

Under the continuous improvement model universities like Park are committed to ensuring their business programs will give students the skills employers desire, Jeff Ehrlich said.

The college has established ties to local high schools and will take Advanced Placement and some high school class credits. They have also sought agreements with the Maricopa County Community College District to take those schools’ hours in transfer, which would go toward building a flexible education model at a “reasonable price point,” Jeff Ehrlich said.

Hiring is taking place for faculty and staff as well as for coaches since Athletic Director Steve Wilson came on board from the main campus.

Park will pay the town nearly $800,000 in rent for three years in the building, originally occupied by St. Xavier University of Chicago for less than a year in 2015-16.

Jeff Ehrlich said he does not worry that low enrollment will cancel any classes. He said a “Pirate Patch” program—an homage to the campus’ mascot, the Pirates—allows students to come together on campus and remotely attend a lecture from a professor at home or one of the other satellite campuses. Students from several campuses can be in the same class that way.

“Gilbert did a fabulous job,” Jeff Ehrlich said. “This is the most technologically sound building—one of the best educational facilities I have ever seen.”