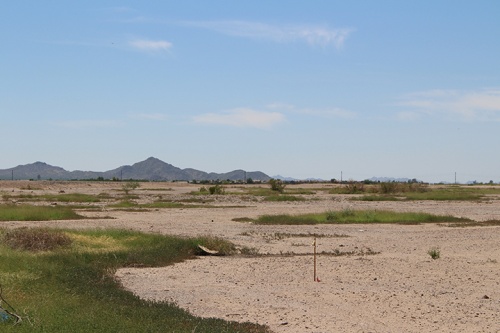 The open land from the southwest corner of Queen Creek and Higley roads will become Gilbert Regional Park.

Though members expressed little warmth for the choices, the Gilbert Town Council named the two parks currently under construction.

The larger park will keep its previous designation as Gilbert Regional Park. What was once called Rittenhouse District Park will be Desert Sky Park.

Residents offered 245 suggestions during a month-long submission period. The council whittled the field to two finalists for each park. The Parks and Recreation Department then allowed people to vote for their favorites.

Desert Sky Park received 73 percent of the vote against Power Sports Park for the site in the Rittenhouse Basin, east of the Maricopa Floodway canal between Pecos and Williams Field roads. Ground broke June 13 on phase one of the park. The $62 million park is expected to have 16 multipurpose fields, a lake and playground on 115 acres at buildout.

The town expects to open Desert Sky Park in September 2019.

Gilbert Regional Park defeated Gilbert Centennial Park—a name posed because the town celebrates its centennial in 2020—by 11 votes among nearly 2,800 cast. Some council members expressed concern about the "vanilla" name, as Councilman Jared Taylor called it.

However, council members Jordan Ray and Brigette Peterson also pointed out that Chandler has its own Centennial Park 5 miles west of the Gilbert site, which could create confusion.

“At some point down the road, we may be looking at this from a branding perspective,” Mayor Jenn Daniels said. “It might be easier to rebrand Gilbert Regional Park than it would be to rebrand Gilbert Centennial Park if we ever acquired a sponsor or something.”

The town broke ground May 29 on the park. It is expected to open in June with pickleball and tennis courts, an accessible play structure and a splash pad. The site at Queen Creek and Higley roads is expected to reach 272 acres at buildout and cost $100 million.