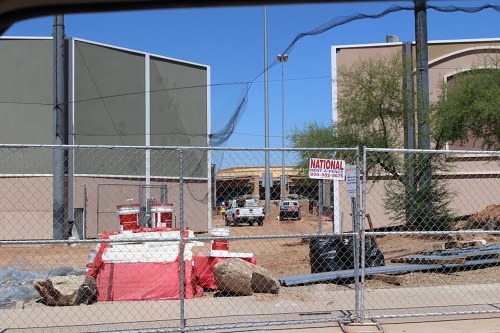 The Town Council is moving forward with plans to have Gilbert take over operations of the former Big League Dreams facility.

The council voted 5-2 on Aug. 16 to approve the hiring of 20.75 full-time equivalents to staff the facility in Elliot District Park. FTEs are positions that when added together equal the hours worked by full-time employees.

The council previously approved two positions in June. The hires would bring staffing to 12.5 FTEs in maintenance and 10.25 in recreation positions. They would allow the town to reopen the facility.

It closed in July 2017 because of the town's safety concerns. Those concerns included crumbling concrete in the grandstands and aesthetic walls—designed to make each field look like a classic Major League ballpark—that were improperly anchored and susceptible to blow over in a wind storm.

The town charged that Big League Dreams failed to meet its responsibility of maintaining the facility. The company and town remain locked in litigation over the issue.

The city has indicated it will take over facility operations and run it as part of its inventory of ballfields.

“We did inherit a failed model, and that's been difficult for us and something that we've worked really hard for many years now to get out from underneath,” Mayor Jenn Daniels said. “We own the facility, and we need to use it to its maximum capacity, and that's the goal of our council.”

Daniels said the council toured the facility to learn its amenities as construction crews worked on repairs. It also sought to understand how those amenities could be used differently by the city to benefit residents. That could include, for example, opening it without a gate fee on some or most days.

“(We want to allow), especially the youth of Gilbert, to go and be inspired by a facility that was built to inspire children, specifically to help them see themselves bigger than they than they might feel sometimes,” she said. “So I don't see this as necessarily being a business. I see this as being a park.”

Council Member Eddie Cook pointed to the park being booked for tournaments for 48 of 52 weekends after it reopens. That, he said, gives the park an economic development effect.

However, Council Member Victor Peterson said the savings to taxpayers he hoped to see from taking over facility operation has not materialized. He pointed to data from the town’s plans for running the facility to draw the conclusion. He cited an annual million dollar structural loss when the facility reopens.

However, interim Parks and Recreation Director Robert Carmona said the town should offset some losses with other revenue. Sponsorships are an example.

Without those sponsorships secured, however, Council Member Jared Taylor said he thought it unwise to have taxpayers underwrite the bill.

Taylor also said the purpose of such a premium facility was more of a “pay-to-play” model that competed with private business. He said that should not be what the town is doing.