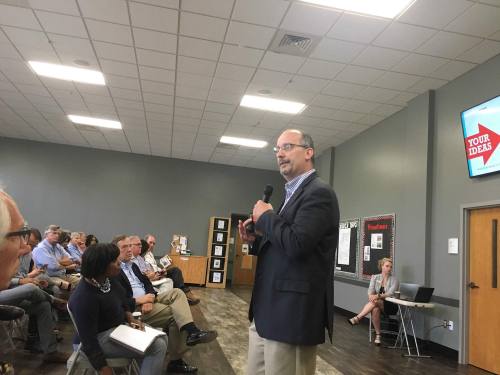 An ongoing study to examine three north-south corridors in Williamson, Davidson and Maury counties is underway, and officials are in need of public input concerning what traffic solutions might work along the I-65 corridor.

The South Corridor Study will look at I-65, Franklin Road and the CSX railway and seeks to determine if rapid-transit solutions could be used in the area as well as how to combat rising traffic issues.

The $1 million study is funded through the Greater Nashville Regional Council, the Tennessee Department of Transportation, Metro Nashville’s WeGo Public Transit, and contributions from local cities and counties, according to Michelle Lacewell, the deputy director and chief communications officer for the GNRC. Cities involved in the study include Nashville, Berry Hill, Brentwood, Franklin, Spring Hill, Columbia and Thompson's Station.

Officials are working with consultant WSP USA to develop the study, which is expected to present an update on its findings in November.

According to study documents, by 2040 the region will see:


Doug Delaney, a senior planner for WSP, said area growth is one of the main reasons the study is needed.

Delaney said it is not yet clear what type of transit, if any, might work along the corridor.

"We recognize that not everyone is going to want transit, that some folks prefer to have their own vehicle for whatever reason, or that it may not work for you on a particular day," Delaney said during an Aug. 12 Frank Talks event. "But we also want to recognize that we need to provide that opportunity, and the transit needs to work in concert with all the other transportation modes and the future needs of the corridor."

About 19% of people surveyed said they use public transit a few times a year, according to Delaney. However, 82% said they would use transit if there was more availability.

So far, survey respondents have said they would prefer to use light rail, bus rapid transit or commuter rail; however, Delaney said the study is examining a number of varying transit options.

Lacewell said community feedback is needed for the study to best determine which transit solutions would be used by residents and commuters.

"This is an opportunity for everyone across the region to tell us what they want, as [in] ... the best way for them to move across the region," she said. "We have a challenge on a regular basis with people telling us they don't want things to change; they don't want the region to grow. It's not always an option to control growth; however, it's an option to manage it. And we want to know from everyone here what you think is the best opportunity to control growth, and what are the least preferred opportunities to control growth because nothing is going to be a one size fits all."

How to get involved and give feedback: