MNPW, which was slated to increase recycling from once per month to every two weeks beginning in February, said it must “temporarily delay” the program due to budget concerns, according to a news release. The department said monthly recycling will remain in place while it works with the Mayor’s Office and the Finance Department to determine how to fully fund the program.

"Biweekly curbside recycling pickup must happen, and soon," Mayor John Cooper said in a statement following the announcement. "I’ve been looking forward to it for a long time, as I know most of you have. But rising costs and our city’s current budget constraints mean that we must temporarily delay the rollout of an additional pickup each month."

In April, former mayor David Briley announced two public and private grants totaling $2.8 million would help make the expansion of the MNPW recycling program possible. The grants—$2.3 million from the Tennessee Department of Environment and Conservation and $506,000 from nonprofit The Recycling Partnership and beauty brand Love Beauty and Planet—were set to fund 16 additional collection vehicles and provide 8,000 more recycling carts for residents.

MNPW said expanding its recycling program will require funding through capital budget allocations in addition to the previously announced grants. Monthly curbside recycling costs the city $2.2 million annually, and costs would increase by about $1.7 million under the proposed expansion, according to the release.

In the meantime, MNPW said it will work with city leaders and residents to reduce Nashville's 30% recycling contamination rate, or the rate at which prohibited materials or items with food residue are recycled. The department plans educate residents about proper recycling methods on its social media channels as well as issue tags on residents' bins when contaminants are found inside.

“If recycling is contaminated, it can’t be processed, and it ends up in the landfill,” MNPW Assistant Director Sharon Smith said in a news release. “That’s what we want to prevent. Our goal is to make the launch of every other week recycling as successful as possible—and that means we want the cleanest materials possible,” Smith said. “Educating the public about how to recycle correctly is a huge part of what we will be focusing on over the next several months and beyond.” 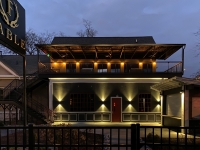