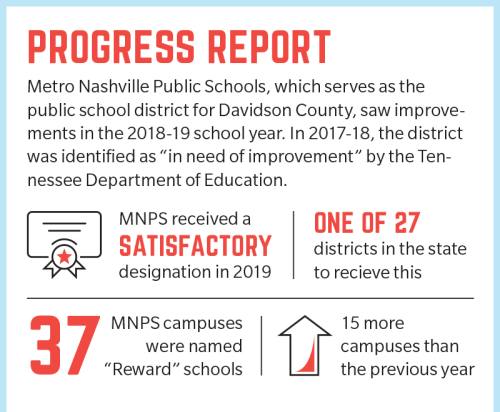 Metro Nashville Public Schools students showed improvement over last year’s scores on TN Ready, the statewide standardized test administered to elementary, middle and high school students every spring, according to data presented to the MNPS board and published by the Tennessee Department of Education in mid-August.

“Data is a useful tool, but it’s not the be-all and end-all of school,” MNPS Interim Director Adrienne Battle said. “That being said, the school district is judged by our test results.”

“Collectively, we are eager to progress as a school district,” Battle said.

According to Paul Changas, the district’s executive director for research, assessment and evaluation, MNPS also improved its accountability score—the state’s five-level ranking system—from “in need of improvement” to “satisfactory.” MNPS’s score, which Changas said is equal to the statewide average, is based on a variety of indicators, including TN Ready scores; student growth data; chronic absenteeism; English language proficiency and other measures.

“We’re glad to see we’ve moved up in terms of our overall status,” Changas said. “We’re actually in the upper region of the ‘satisfactory’ category—just two tenths of a point from ‘advancing’ … I’ll take ‘satisfactory’ after what we saw last year.”

In addition to sharing preliminary testing data, Changas reported all grade levels improved in chronic absenteeism and English language proficiency. Data shows chronic absence, or students missing a tenth or more of the school year, has decreased by 2%, from 18.1% to 16%, but the MNPS rate was still higher than the state average of 13.1%.