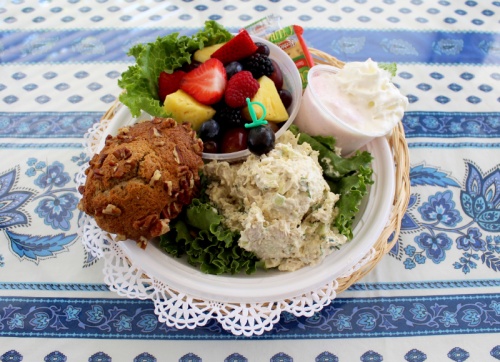 The Picnic Delight ($11.95) The eateryu2019s signature chicken salad comes with sides such as frozen strawberry salad, fruit salad and a muffin.

When Kathy Bonnet founded The Picnic Cafe in 1983, she said she traded her teaching job in pursuit of one of her passions: chicken salad.

“I was always in search of the best chicken salad out there,” Bonnet said. “I loved it so much; I decided to make my own and make a living out of it.”

However, before Bonnet opened a brick-and-mortar location in Belle Meade, she slipped on a sandwich board and hand-delivered the sandwiches—her version made with chicken breast, eggs, celery, pepper and Hellman’s Mayo—to local businesses during lunch time.

Bonnet said her operation soon outgrew her kitchen space, leading her to secure a location inside Belle Meade Drug Store, which The Picnic Cafe called home for 24 years. When the shopping center was redeveloped in 2007, Bonnet said she had three months to relocate a few doors down to her current stand-alone restaurant on Harding Pike.

“We reopened in the new location the very morning after we had to close up our other restaurant,” she said. “We didn’t want to waste any time getting back into the kitchen.”

According to Bonnet, The Picnic Cafe is known for many items other than its chicken salad, including frozen fruit salad, cheese wafers and Picnic Punch, made with orange and lemonade concentrates, cinnamon, mint and other ingredients. Despite a host of Southern staples on the menu, she said chicken salad will always be the main attraction.

Aside from the menu, Bonnet said The Picnic Cafe is a place where friends can meet for breakfast or catch up over lunch. A rotating group of 10 or so regular customers known as “The Coffee Club” can be found at the same table every morning, she said.

“I can stand in front of the counter and chances are I’ll know the daughter, mother and grandmother who comes in,” Bonnet said. “It’s a generational kind of place. We truly belong here.”