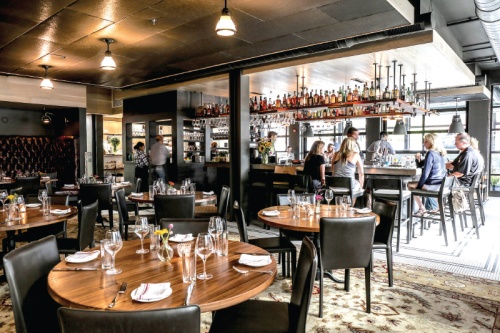 At Josephine on 12th Avenue South, chef Andy Little combines his Pennsylvania Dutch roots with ingredients unique to the South, a fusion he said he refined when offered the position at the new restaurant in 2013.

“A big thing for me is to take the flavor profiles I grew up with and incorporate local or regional products and see what happens by combining those two things,” Little said. “It ends up creating a pretty unique cuisine and certainly one that can only happen in Nashville based on the products we have.”

Despite falling on opposite sides of the Mason-Dixon line, Little said there are many similarities between the food of central Pennsylvania and what is considered Southern fare, such as cooking vegetables in diverse ways or finding uses for the entire animal while cooking.

“When we first opened, some of the recipes I brought down from Pennsylvania just simply didn’t work,” he said. “We had to come together and rework them based on the products that we’re able to get.”

As Little prepares to phase out spring ingredients such as asparagus and peas, he said summer ushers in grilled menu items as well as dishes made with cucumbers, corn, radishes, strawberries and other lighter seasonal fruits and vegetables. With farmers market season in full swing, Little said he spends his Saturday mornings browsing local markets for new inspirations.

“A lot of it comes down to what am I kind of excited about eating at this point in time,” he said. “Hopefully the things I’m interested in eating or the perspective we have on the season is something that is also really exciting for the guests.”

Joining Little at Josephine are his wife, Karen, who serves as the restaurant’s general manager; Executive Sous Chef Ellen Rounds; and Executive Pastry Chef Kayla May. Little said he invites everyone on staff to enjoy a “family meal” before the restaurant opens at 5 p.m.

“The time we’re able to spend together at the 3:30 p.m. meal really sets the tone for the rest of the evening,” Little said. “We try to provide food that is exciting and interesting to guests, so it’s important we also do that for the team since we literally see them more than we see our own family.”

Little said he is especially excited when staff who are not scheduled for the day show up at the meal, something he said reinforces the family atmosphere he strives to create at Josephine.

“Because Karen and I are married and work together every day, we’re able to provide a more of a family atmosphere,” he said. “I feel like some days we have 55 kids, but I wouldn’t want to be involved in a restaurant that does it any other way.”