support local journalismbecome a community patronCommunity impact Newspaper's mission is to build communities of informed citizens and thriving businesses through the collaboration of a passionate team. Consider supporting our journalism efforts by becoming a Community Patron today.
Continue Readingcontribute today
sign up for our newsletterbecome a community memberCommunity Members have access to our e-edition and can sign up for our daily e-newsletter
Already a Member?Sign in
Sign up now
Development

Music Row named one of America’s most endangered landmarks 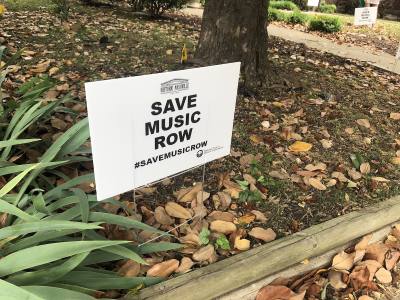 The National Trust for Historic Preservation announced May 30 that Music Row is on its 2019 "America’s 11 Most Endangered Historic Places" list.

“Music Row is exactly the kind of cultural district that many other cities have been trying to create,” said Katherine Malone-France, the interim chief preservation officer of the National Trust for Historic Preservation, in a news release. “The sweeping arc of the past and present of the music industry can be felt in Nashville’s modest late-19th century bungalows and small-scale commercial buildings that have inspired and incubated the creation of music for generations. If demolitions and zoning exemptions continue, this one-of-a-kind musical ecosystem will be lost forever.”

Recognition from The National Trust for Historic Preservation comes as the Nashville Metro Planning Department is accepting comments on the Music Row Vision Plan, an 87-page document detailing the department's plans for preserving buildings in Music Row as well as establishing new guidelines for development in the area.

The department is accepting public comments until Monday, June 3.

“This designation is the happiest we’ve ever been receiving bad news,” said Elizabeth Elkins, the vice president of the board of Historic Nashville Inc., in the release. “We are glad that the rapid rate of destruction of Music Row will now be in the national spotlight, as the zoning and ongoing demolitions strike at the heart of our greatest fear, which is the unabated loss of the compelling spaces that are the backbone of what makes Music City both an internationally-known destination and a unique place to live and work.”

The National Trust and local preservation group Historic Nashville Inc. are urging the department to make changes to the plan, such as discontinue specific plan exemptions, establish a nonprofit entity to help preserve the community and eliminate recommendations for increased building height allowances anywhere in Music Row.
SHARE THIS STORY