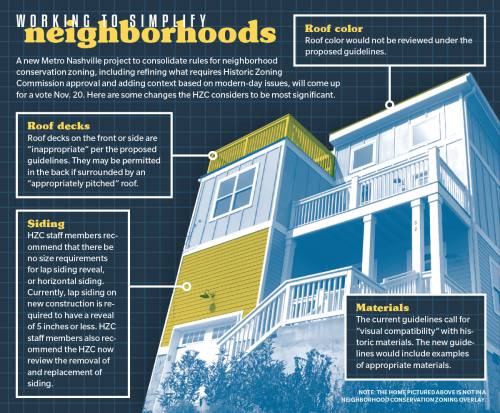 For residents who live in neighborhood conservation zoning overlays, a type of zoning established in 1985 to maintain character in Nashville’s historic neighborhoods, proposed changes to the current guidelines could affect how property owners can tackle certain projects.

In September, Metro Nashville’s Historic Zoning Commission considered a plan to consolidate the design standards for the city’s 23 neighborhood conservation zoning overlay districts—14 of which are located in Southwest Nashville—into one set of guidelines.

The proposal, which commissioners deferred to their Nov. 20 meeting, dates back to January, when the HZC began seeking community input for the state-funded project.

As part of the proposed revisions, the commission is also considering new standards for outbuildings—additional structures, such as carports, garages or sheds—which are expected to offer more flexibility in terms of size and design, officials said.

Feedback from property owners, applicants and council members, as well as discussions with stakeholders at eight community meetings held between February and July, helped shape the draft guidelines, according to Historic Zoning Administrator Robin Zeigler.

“[The project] started because of several years of concerns from commissioners and applicants that the design guidelines were not always clear, especially when it comes to outbuildings,” Zeigler said. “One goal is to provide clearer direction and address actions not considered when the guidelines were originally written.”

Zeigler said consolidating design standards for individual NCZOs into one document with chapters for each neighborhood provides an opportunity to add context within guidelines based on cases reviewed in recent years. If approved, the updated guidelines remove “strict language” so unique cases can be addressed by the commission, she said.

“The goal of any set of design guidelines is to provide applicants a planning tool and to provide the board of commissioners a decision-making tool that works towards ensuring that decisions are fair,” Zeigler said.

However, she added that even with the issues neighborhoods are now facing—such as increased traffic and parking; loss of rear-yard privacy and water runoff—the role of commissioners is to protect the overall historic character of the districts.

According to Zeigler, the commission approves or disapproves the applicant’s plan based on its compatibility with the neighborhood conservation overlay, not the reason for construction. This applies to current and future guidelines, she said.

“Although these are all real concerns in our neighborhoods, they are not something that a design review process is designed to address,” she said.

The proposed revisions range from refining what requires HZC approval to addressing issues not considered when guidelines were drafted for each district, according to the plan.

In addition to adding context and reorganizing sections based on the existing guidelines, Zeigler said the project—in its second component—will include work to create a plan book for outbuildings in NCZOs. These guidelines are meant to consider modern uses for outbuildings by reviewing their overall height and mass, as opposed to style and scale, in relation to a primary building, according to the plan.

“Outbuildings have been problematic, as new outbuildings have not followed historical precedent,” Zeigler said. “It’s also been a confusing process for applicants, especially those who are not designers … The calculations alone have meant the disapproval of some outbuildings that likely would have fit in well with the neighborhood.”

All new buildings and additions in a NCZO require both a preservation permit from the HZC and a building permit from the Metro Nashville Department of Codes and Building Safety, according to Zeigler.

To expedite the permit process for outbuildings, Zeigler said the HZC hired a consultant to draft 20 form options, ranging from one story to two stories, that are appropriate for lots larger and smaller than 10,000 square feet.

“These forms are meant to be flexible and appropriate for any of the conservation overlay districts,” said Ron Yearwood, a project manager at Smith Gee Studio, the consulting firm on the project. “You don’t necessarily have to pick a form. You could go through the regular review process and submit something outside of these bounds.”

While Zeigler said most of the proposed changes have generally been well-received by community members, some proposals, including the HZC staff recommendation that the commission begin reviewing replacement siding, are receiving pushback at stakeholder meetings.

Under current guidelines for NCZOs, commissioners do not review the replacement of siding, windows, doors and roofing materials; however, if more than two components are to be replaced, the plans are reviewed by commissioners as a “partial-demolition.” While non-historic siding could be replaced, as could siding on a non-historic building, Zeigler said that historic siding would need to be beyond repair in order for its removal to be approved.

Some stakeholders said the requirement of a review of replacement siding is one of the major differences between NCZOs and historic overlay districts and should not be adopted.

Additionally, if an applicant chooses a form option for an outbuilding, the HZC will not require a public hearing for the project, according to Zeigler. Irwin Venick, a stakeholder and representative for the Woodlawn West Neighborhood Association, asked the HZC to consider allowing individual NCZOs to select forms they consider to be appropriate for their neighborhoods.

“From my perspective, looking at the pre-approved plans, there are a number of them I wouldn’t think would be appropriate for my historic conservation zoning district,” Venick said. “Each zoning district should be allowed to opt in to say, ‘We find these particular plan forms to be appropriate in our district, and others do not.’”

Following less than 20 minutes of discussion among the nine-member HZC at the Sept. 18 meeting, commissioners agreed to defer the proposal so staff members could further engage with stakeholders. At-large Council Member Burkley Allen, who was also in attendance, said she understands the need to consolidate the guidelines but hopes the HZC can reach an agreement that both commissioners and stakeholders can understand.

Prior to holding the final vote, HZC member Cyril Stewart said he encourages other board members to keep researching the proposed guidelines.

“There has been a real clear sense that the public, the applicants and the architects want something more definitive so that they know how to go about design,” Stewart said at the meeting. “If we can come up with administrative approvals that save them from coming down here to spend an afternoon with us … it really behooves us and others to study those documents and come back together to find the best document for everybody.”

The HZC will resume the public hearing on the consolidation project and is expected to vote on the proposed changes Nov. 20 at 2 p.m. at the Sonny West Conference Center, 700 2nd Ave. S., Nashville.