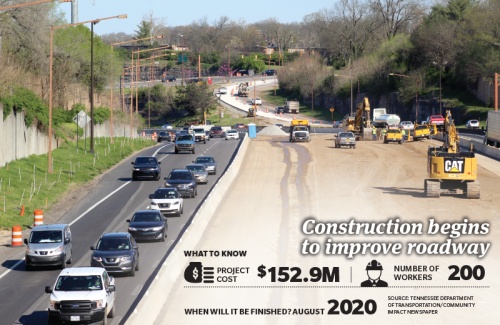 A major road project on I-440, one of Nashville’s main arteries connecting I-40 west with I-65 and I-24 south, will cause ongoing lane closures along a 7.6-mile stretch through August 2020.

The bulk of the $152.9 million project—the most expensive in Tennessee Department of Transportation history, according to the transportation agency—began March 1.

Crews are working 24 hours a day, six to seven days a week to replace deteriorating concrete pavement with asphalt, widen the I-440 bridge over I-65 and upgrade the entire roadway to three lanes in each direction.

“Once the project is finished, having the three lanes, plus an auxiliary lane, is certainly going to help move things along,” TDOT spokesperson Kathryn Schulte said.

The planned improvements, which span the entire interstate from I-40 on the west side to I-24 in southeast Nashville, will increase road capacity and improve safety along the corridor, according to TDOT Chief Engineer Paul Degges. He said replacing the grassy median with pavement not only addresses congestion, but it also aims to curb fatal traffic accidents.

The crash rates on I-440 are 1.8 times higher than the statewide average, Degges said. Since 2008, there have been 16 fatalities on the corridor, according to TDOT.

“We believe one of the main safety issues is the median,” Degges said. “We see a lot of the crossover-type crashes, which can be pretty horrific when vehicles traveling opposite directions hit each other.”

Due to lane and shoulder closures and shortened merge lanes, TDOT has launched an incident management plan to minimize backups and provide access for emergency vehicles.

“If a driver runs out of gas, that could affect a whole lane of traffic,” Schulte said. “It could be even worse in the event of an accident.”

As part of the program, TDOT’s Transportation Management Center operators monitor the corridor 24-7, dispatching help trucks stationed along the interstate to assist motorists as needed with fuel and other resources, Schulte said.

According to Schulte, the contractor must maintain access for emergency responders throughout the corridor.

“We recently established crossover areas for emergency vehicles, which are small clear paths throughout I-440,” Schulte said. “If traffic is stalled or moving slowly, an ambulance or emergency responder can get through to the other side.”

“We all knew the likelihood that some traffic would divert off I-440 and on to state routes and Metro Nashville’s local street network,” Assistant Director of Public Works Jeff Hammond said. “Public Works has been working with TDOT on various scenarios on how to manage traffic since the very beginning.”

In addition to signal timing projects, the department is utilizing technology to monitor speed and congestion at 20 intersections near Thompson Lane, Harding Place and Wedgewood Avenue. The three corridors parallel to 440 each see more than 30,000 vehicles per day, according to TDOT.

“Right now, Public Works is in a wait-and-see mode,” Hammond said, adding that the department foresees more increased traffic effects in neighborhoods surrounding Green Hills, West End and the far east side of the interstate. “It’s anybody’s guess as to how I-440 work might impact any given street in Nashville.”

While project delays are not expected, residents will likely notice more noise than usual near the roadway, an effect TDOT officials are looking to minimize.

The contractor, Kiewit Infrastructure South Co., is permitted to work 24 hours a day, seven days a week, Schulte said. Crews begin rubblizing the roadway in late April or early May, a process that involves breaking up existing concrete.

Schulte said the rubblizing machine features a dozen hammers weighing up to 1,700 pounds each, which pound the ground 30 times a minute to break up concrete.

“When considering decibel levels, the machine is similar to loud interstate traffic,” Schulte said. “I-440 doesn’t have a lot of interstate traffic at night, so that’s not a noise residents are used to hearing at that time.”

Although noise during overnight hours is unavoidable, Schulte said she expects crews to keep moving and will not stay in one location for long. Nearby residents will likely hear more construction activity when the rubblization work picks up this spring, she said.

“We want to give everyone a good idea of when the activities are in your area,” she said. “While we can’t stop the noise, we do want to let you all know when it will be at its worst.”

Once the project is finished, Degges said new and improved noise walls and additional lanes will cut down on everyday interstate noise.

“We’ve heard from the community over the years about noise, a lot of which comes from people slowing down and speeding up when merging into two lanes of traffic,” he said. “We anticipate that to cut down when we have three lanes.” Construction activity on I-440 is not expected to affect MNPW projects planned near the interstate, including the upcoming intersection realignment of Crestmoor Road and Glen Echo Road in Green Hills, according to Hammond. The realignment, one of the department’s top priorities, is expected to alleviate congestion caused by the short turn lane before approaching Glen Echo.

“That’s certainly something we’re going to be looking at as TDOT finishes I-440 and we prepare for the realignment,” Hammond said. “At this point, the interstate may be reconstructed by the time Public Works is ready to start working.”

Before MNPW begins the project, CVS will relocate across the street to the former Krystal Burger property, located on Hillsboro Pike. Metro Nashville District 25 Council Member Russ Pulley, who represents the Green Hills area, said the retail company must construct their new property before MNPW can begin the realignment project.

“When CVS secures the final parcel of land needed for their new store, they will then demolish the former Krystal site and spend five to six months building,” Pulley said. “There will be a waiting period for Public Works until they move into the new store.”

Realigning the intersection will likely take one year to complete once MNPW is ready to demolish the current CVS building and begin road work, he said.