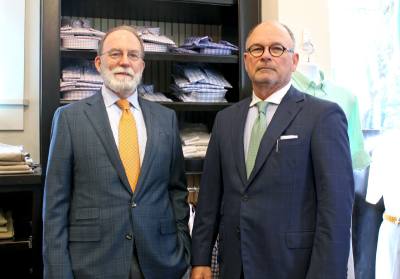 Co-owners Mike Mahaffey and Jim Brandon have been business partners since the early u201890s.

Mike Mahaffey, co-owner of J. Michaels Clothiers in West End, said he relocated from Dallas to Nashville in 1986 to pursue a music career but instead found a lifelong calling for men’s custom-made clothing.

“There’s a psychology behind dressing well,” Mahaffey said. “It’s a balance between how you’re perceived and how you feel in what you’re wearing. It’s a very personal business.”

Mahaffey said he learned the trade of bespoke clothing, or custom-made apparel, while working with Texas-based clothier R. W. Furr. In 1989, Mahaffey launched J. Michaels Clothiers as an appointment-only business, and opened a retail location in 2001 with co-owner Jim Brandon.

“For the first decade in business, we went directly to the customer,” he said. “That’s something we didn’t want to lose sight of when opening a retail store.”

Mahaffey said the business accommodates customers who want to visit the shop and those with busy schedules.

“It’s not uncommon to find men who don’t like to shop,” he said. “A lot of successful men who require professional clothing simply don’t have the time to shop.”

The store’s motto is “architects of style,” a phase Mahaffey said staff members live by. He said bespoke clothing is timeless.

“There will always be new clothing fads—that’s something we know for certain,” Mahaffey said. “However, a sense of harmony in one’s wardrobe is more important than jumping on the latest trend in fashion.”

He said the staff believes clothing styles and fabrics should be unique to each customer.

“The way we dress is a nonverbal way of communicating with those around us,” he said. “Men who want to be seen as confident and accomplished in their endeavors should dress in a way that gets the message across.”

Games To Go Nashville offers games created by Hunnicutt himself including “Yardzee,” an oversized version of Yahtzee, and Soccer Pool, a billiards game using a large court and colored soccer balls.

The announcement comes just a few days after Gov. Bill Lee issued an executive order that allows parents to have their children opt out of local mask requirements.

According to numbers released by the district Aug. 17, 276 students and 47 staff members are in isolation with a confirmed positive case.

Gov. Bill Lee said parents will be able to decide whether their children can opt out of local mask requirements.

The session would address the ability of local boards to make decisions related to COVID-19 and calls for paid leave for teachers.

After nearly four hours of debate, the board approved the mask requirement in a 7-3 vote.