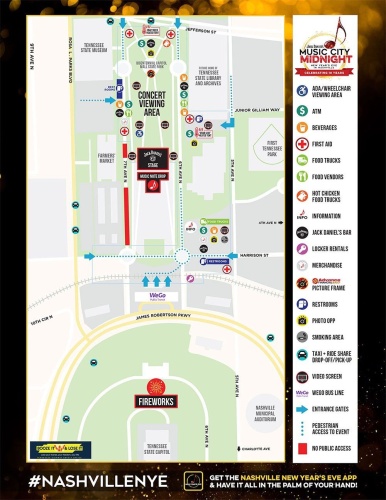 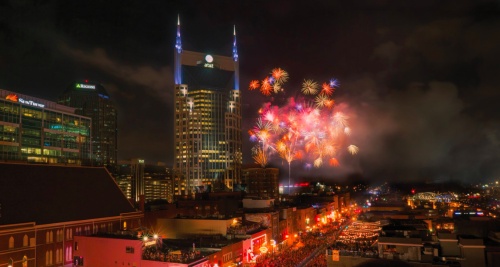 Due to weather, gates will now open one hour later than scheduled. Attendees can arrive at 5 p.m. with the first set scheduled to begin at 5:30 p.m.

The 10th annual Jack Danielâ€™s Music City Midnight: New Yearâ€™s Eve in Nashville â€”Â the city's free New Yearâ€™s Eve celebration â€” is the place to be if you want to ring in the New Year with thousands of country and rock fans at Bicentennial Capitol Mall State Park.

Here are a few things to know about the event expected to draw more than 100,000 people to Bicentennial Capitol Mall State Park, located at 600 James Robertson Parkway:

Expect a Music Note Drop, fireworks show and a lot of confetti

A new 16-feet tall music note will be dropped from a 140-feet tall tower this year. The 3D music note features video boards and more than 13,000 LED pixels.

As for fireworks, the Bicentennial Mall location will showcase the State Capitol during a one-minute firework show at 6 p.m. when the Music Note is raised and a five-minute display at midnight. Additionally,Â 100 pounds of biodegradable confetti will shower down on attendees.

What will there be to eat and drink?

Food trucks will be clustered at Sixth Avenue and Harrison Street, along with beverage stands and bars. You'll also spot picnic tables, a selfie station andÂ event and artist merchandise.

Local craft brews will be available for purchase in a heated tent on Jackson Street.

Why are there so many red buildings downtown?

How about event safety and security?

The eventâ€™s perimeter will be fenced and include seven entry points located around the site. Attendees should expect to walk through metal detectors as they enter, as well as have bags and purses searched. There will be five public first aid tents.

Permitted items include small bags with maximum measurement of 16 inches by 10 inches by 4 inches. Handheld umbrellas and personal cameras are also allowed.

What should I know about arriving at and leaving BicentennialÂ Capitol Mall State Park?

And if you'd rather participate in ride sharing or take public transportation, here'sÂ what to know.

However, new this year isÂ Krystalâ€™s Late Night LyftÂ initiative that provides free rides beginning at 9 p.m. New Year's Eve up until 4 a.m. Riders traveling within a 25-mile radius of downtown Nashville will receive a $15 credit.

â€œWith 100,000 attendees expected yet again for New Yearâ€™s Eve in Nashville, Iâ€™m thankful that companies such as Lyft and Krystal are stepping up to provide a free, smart transportation option,â€ said Nashville Mayor David Briley. â€œI encourage all residents to make safe choices this holiday season.â€

New Yearâ€™s Eve partygoers can reserve a free Lyft ride (up to $15 off) using the code "KRYSTALNYE."

Where are the ride share and taxi drop off and pick up locations?

I just want to watch the celebration from homeÂ â€” can I?

Yes. To view the livestream, go toÂ visitmusiccity.com/newyearseveÂ where you can watch the countdown to midnight, Music Note Drop and fireworks.

While on the site, you can also find the event schedule, transportation information, site map, FAQs and more.