Is there a plan to fix Green Hillsâ€™ traffic? 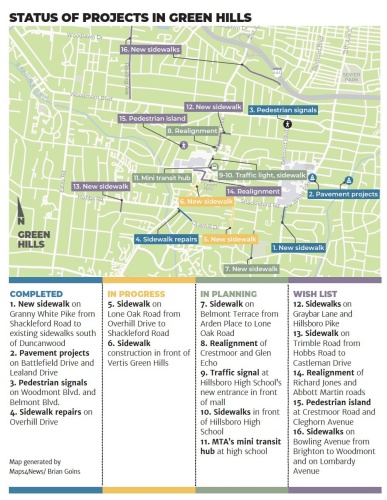 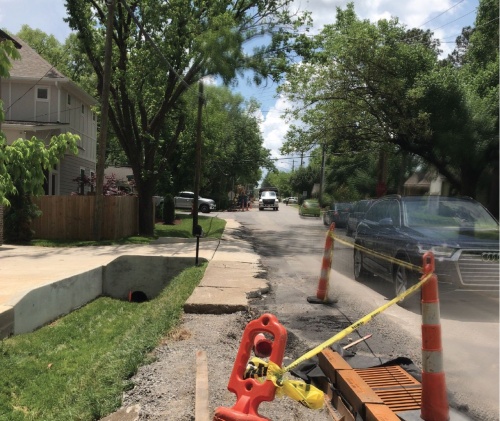 After Davidson County voters rejected a $5.2 billion mass transit plan in May â€” which proposed 26 miles of light rail, expanded bus service and a below-ground tunnel downtown â€” many local residents are left wondering what can be done now to address the regionâ€™s significant traffic issues.

Another referendum is not an option because Nashville created the plan under the stateâ€™s Improve Act, a law that authorizes local governments to fund transportation projects through taxes by public referendum. The next vote canâ€™t come before May 1, 2020.

Solutions will have to come through initiatives like NashvilleNext, a plan intended to guide the cityâ€™s growth and development over the next 25 years.

The good news for Green Hills is that the Green Hills Area Transportation Plan, part of NashvilleNext, has been approved. However, funding for the majority of items in the plan has not been approved and thereâ€™s no clear sign what will be funded or when it would happen.

Work at Hillsboro High School and the Crestmoor realignment project are the two bright spots when it comes to Green Hills traffic progress. But anything beyond that â€” outside of minor projects â€” doesnâ€™t have a firm timeline or committed funds. City officials have said it may be necessary to look at the overall plan for the Green Hills area.

Whatâ€™s in the plan?

The plan, adopted by the planning commission in March 2014 to address Green Hillsâ€™ mobility needs, identifies a range of improvements: traffic signalization and synchronizing, new sidewalks and bikeways, the addition of turn lanes at strategic locations to help with traffic flow, realigning intersections and creating road connections, and more.

Michael Briggs, manager of Metro Planningâ€™s multimodal transportation planning and programming department, said the plan indicated a strong need for transportation investments in the regionâ€™s commercial and retail core, as well as in surrounding neighborhoods.

â€œWe havenâ€™t really done anything like this in many areas of the county,â€ Briggs said. â€œItâ€™s pretty critical as development continues to occur that we look at the guide and some of the street improvements and connectivity in the area.â€

The transportation plan went through a vetting process among business stakeholders in the community, the Tennessee Department of Transportation and the Metropolitan Planning Organization (the regional transportation organization). Metro Planning took note of suggestions at community meetings, looked at the technical aspects of the plan and sent the plan back through the community for final feedback before being adopted by the commission.

According to the plan, projects can be funded through the cityâ€™s general fund or through future increases in property taxes generated by the development. Hillsboro Pike is a state highway and eligible for federal funding.

Waiting for the right time

According to Briggs, both street connection and realignment projects take years of planning, and due to area growth and construction, often only come to fruition when another project allows for the opportunity.

This most recently happened when Krystals closed its location on Hillsboro Pike, a move that set in motion the impending realignment of Crestmoor and Glen Echo roads. The other realignment project noted in the area transportation plan, Abbott Martin Road and Richard Jones Road, wonâ€™t be happening any time soon, Briggs predicts, due to construction at Hillsboro High School.

â€œIf the high school had decided to relocate on the property to a taller building and move extracurriculars off-site, there would have been an opportunity to have more of a street grid network in that area,â€ he said. â€œBut the high school is located too close to the realignment area for it to work in the near future.â€

Briggs said side streets located off Hillsboro Pike are intended to be connected but that streets located within the commercial core are easier to connect than in residential areas. The planning department keeps track of development in the area in the event an opportunity arises.

â€œThe possibility for street connections depends on if properties are being developed where the connections are identified,â€ he said, noting that unconnected streets tends to funnel traffic onto the main arterials. â€œSo if someone is redeveloping one of the lots, whether itâ€™s commercial or residential, thatâ€™s when we start looking to make those connections.â€

The plan for sidewalks

According to Briggs, the city wants to connect side streets in Green Hills to the commercial district with sidewalks.

Sidewalk improvements on Lone Oak Sidewalk are now under way, with improvements on Belmont Terrace near Green Hills park expected to begin later this year. Sidewalks along Hillsboro Pike and Trimble Road are currently in the planning phase.

Briggs said if a project is identified as planned, which doesnâ€™t mean funded, Planning and Public Works are looking to address the project within a few years. But if problems arise during the planning phase, the departments may have to move on to another project.

When Freebird World Burritos began developing its 3800 Hillsboro Pike restaurant, located across from CVS, a Metro policy required developers to construct a sidewalk in front of the businesses. Elizabeth Miller, secretary and board member of the Green Hills Alliance, said this new sidewalk, along with the future realignment at Crestmoor and Glen Echo, will create a corridor where residents can walk down Hillsboro.

Nashville allocates about $30 million for sidewalk projects each year.

â€œWe have to look at the whole county geographically to see where needs are,â€ Briggs said. â€œWeâ€™re trying to develop them into actual construction projects based on that.â€

Where are the bikeways?

{{tncms-inline alignment="left" content="&lt;p&gt;As of April, residents can keep track of projects on the WalkNBike status tracker, an interactive map that shows the current pipeline of sidewalk and bikeway projects programmed throughout Davidson County. Find the tracker at www.nashville.gov/Public-Works/WalknBike.&lt;/p&gt;" id="bd3f1cd8-5ffb-47fb-879a-063657c2d54c" style-type="info" title="Keep track of projects" type="relcontent" width="full"}}

In the last five years, Public Works has completed two bikes lanes, one on Bandywood Drive in 2013 and the other on Richard Jones in 2015. According to Public Works' list of capital projects, there are no bikeways planned, funded or under construction in the Green Hills area at this time.

"These areas are not that far from Green Hills but are different in many ways," Kern said. "But that doesn't mean Green Hills can't look to those areas as examples."

The plan suggests adding B-cycle bike renting stations in the Green Hills area, including Lipscomb University, The Mall at Green Hills and the Green Hills YMCA. B-cycle stations, which cost about 40,000 to install, are funded by the property owner and maintained by the company. With no stations planned or funded at this point for Green Hills, residents can access the closest location at Sevier Park in 12 South.

"There are challenges when there's not dedicated funding for transportation," Kern said. "That's why it's important to have everyone stay engaged with the transportation conversation as we move forward and try to figure out the solution. Until we have dedicated funding, a lot of our priorities are going to be unmet."

The movers and shakers

The Alliance for Green Hills acknowledges that even with the construction of more sidewalks, pedestrians may not know if a sidewalk is safe. To combat this, the organization seeks to fund a pilot project for wayfinding signs that would designate where to walk.

The goal of the improvement was to increase safe access for pedestrians, more specifically residents of the Green Hills Apartment for Retired Teachers, to nearby retail and grocery.

â€œI think right now we're sitting back and waiting for the next big things,â€ Miller said. â€œOnce the high school construction is finished and we also have the realignment of Crestmoor, thatâ€™s when we can turn our attention to what's coming next.â€

With two projects along Hillsboro Pikeâ€”the realignment of Crestmoor and Glen Echo roads and Hillsboro High School's reconstructionâ€”expected to be finished in 2020, itâ€™s unclear what the next major untaking will be.

â€œThe big projects along Hillsboro won't be happening overnight, but that's where our focus is now,â€ Briggs said. â€œWe recognize that Green Hills has grown a lot since we developed the plan, so as we start checking things off, we will need to reexamine what makes sense going forward.â€