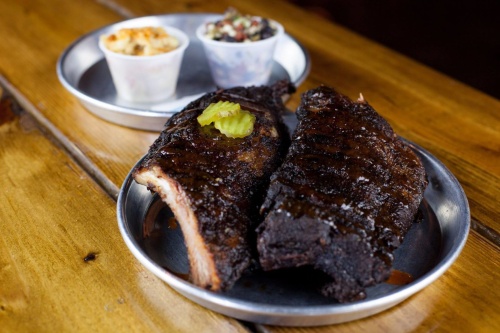 Bar-B-Que, barbecue or BBQ? It doesnâ€™t matter how you spell the word, people just love to eat it. So much so that tomorrow, May 16, is National Barbecue Day. While we wonâ€™t get into what part of the country truly has the best barbecue (thatâ€™s a topic for another day), this list will surely help you navigate nearby restaurants andÂ â€” if the feeling strikesÂ â€” lead you to the nearest barbecue pit.

Know where to get some good local â€˜cue? Let us know at [email protected].

The family behind Whittâ€™s Barbecue has been serving barbecue to the Nashville area since the late '70s. Whether itâ€™s barbecued pork, turkey or ribs, the meat is hickory smoked for 24 hours. Bill Dean, his wife Peggy and their three daughters opened the first Nashville franchise March 1, 1978 on Antioch Pike. Forty years later, Whittâ€™s has grown to operate 24 restaurants.

From sides to sauces, Martinâ€™s Bar-B-Que Joint takes pride in making things from scratch. The joint is the brainchild of local restaurateur Pat Martin, who also owns the retro BBQ and burger shop Hugh Babyâ€™s. Martin honed his craft out in West Tennessee more than 25 years ago but didnâ€™t open his first restaurant until 2006, right here in Nashville. Today, there are five locations in the area, including downtown, Belmont, Nolensville and more.

Named after Edley Newman, the late grandfather of owner Will Newman, Edley's Bar-B-Que serves a host of sandwiches, platters, tacos and more. The restaurant smokes only enough meat for the day, so it's a first-come-first-serve kind of establishment. While the nearest Edleyâ€™s is located right down the road in 12 South, the restaurant has five locations: three in Nashville, one in Lexington, Kentucky, and one in Chattanooga.

Located in the Belle Meade area, Dickey's Barbecue Pit is a Texas-based chain known all over the country. Dickey's serves seven styles of meats, smoked daily onsite, along with more than a dozen sides to choose from. According to its website, the restaurant's origins begin inÂ 1941Â when Travis Dickey opened a barbecue stand in Dallas, Texas. Now it has grown to more than 500 locations.