Pastor Kevin Riggs of the Franklin Community Church said he remembers calling for the removal and relocation of Chip, the Confederate monument in the center of Franklin’s historic downtown, during a vigil for the victims of the violent protests in Charlottesville in 2017.

Not long after the vigil, Riggs said he was contacted by Eric Jacobson, the CEO of the Battle of Franklin Trust, about putting Chip and monuments like it into their correct historical context by telling more of the story than a statue honoring Confederate soldiers would on its own.

“Pretty soon in the conversation, I stopped him and told him, ‘What you’re saying is a compromise, and a compromise, to you and me, may sound good because we’re both white, but I need to introduce you to a couple of my African American pastor friends, and you tell them what you told me,’” Riggs said. “It really is about them. It really isn’t about us.”

To help add more context to the city’s history, Jacobson and Riggs, together with two other local pastors, Chris Williamson and Hewitt Sawyers, formed Fuller Story of Franklin in 2018, an initiative dedicated to telling the broader narrative of those involved in the Civil War. Over the past two years, the group has worked to add five historic markers dotting Franklin’s town square, which were unveiled in October. The group is also working toward adding a monument commemorating the United States Colored Troops, slated to be placed next year.

“The story in the South is very one-sided,” Riggs said. “I don’t know anywhere else in the world you could go where you have a battle that was fought, and the side that loses puts up all the monuments and then controls the narrative of what actually happened. ... You have these other stories now that balance it out.” 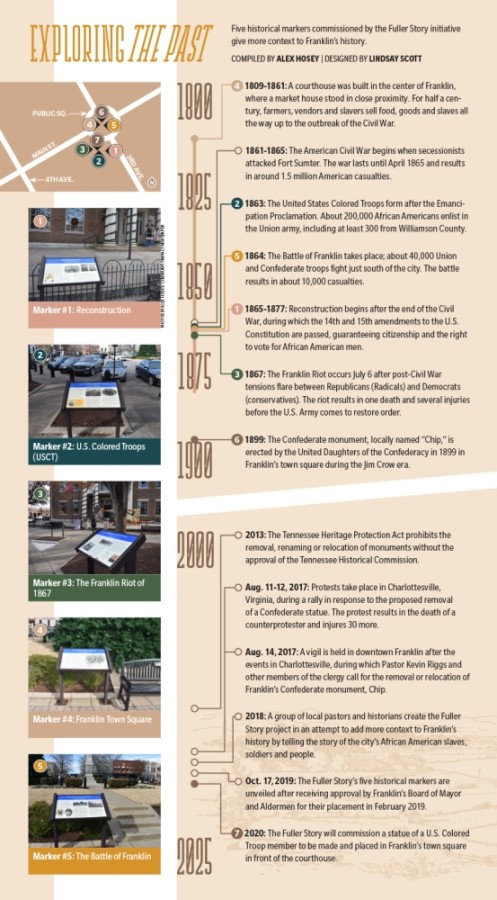 Riggs said the group of pastors and historians involved with the Fuller Story began by approaching the city of Franklin to try to relocate the monument of Chip from the city square.

“Our first meeting with the city was really [about] if a group of people wanted to relocate a monument somewhere else—and we didn’t use the word ‘remove’ or ‘tear down’—to the battlefield or somewhere, [and] how we could do that legally because we didn’t want violence,” Riggs said.

However, the Tennessee Heritage Protection Act, enacted in 2013 and further amended in 2016 and 2018, prohibits the removal, renaming or relocation of memorials or monuments located on public property without the approval of two-thirds of the Tennessee Historical Commission.

With the relocation of Chip not being an option, focus of the Fuller Story shifted to adding history to Franklin’s downtown landscape with markers to show the accomplishments of black Americans and the injustices that were committed against them in the history of Franklin and Williamson County.

The five markers, approved by Franklin’s Board of Mayor and Alderman in February and unveiled Oct. 17, give historical information about the city square’s history of being a slave market; the United States Colored Troops during the Civil War; the Battle of Franklin; the Franklin Riot of 1867; the transition from post-war Reconstruction to the era of Jim Crow laws; and the complicated history of Franklin’s courthouse.

Riggs said the markers were funded entirely by private donations, and the total cost for the markers was $10,000.

The next phase of the Fuller Story project will include a monument of a USCT soldier in front of Franklin’s courthouse to depict one of the original 300 volunteers of the USCT that came from Williamson County.

Riggs said $20,000 had already been pledged to the statue project, with the total cost estimated to be about $150,000, and he expects the statue to be placed sometime next year.

“The idea was that if we could put that statue somewhere in relation to Chip, then, you would have a balance between the Confederates and the Union, with the Union representative being an African American soldier,” Riggs said.

According to Riggs, the vast majority of Franklin residents seem to be supportive of Fuller Story and the markers, despite initial hate mail he said he received after he called for Chip’s relocation in 2017.

Franklin City Administrator Eric Stuckey said the community has embraced the concept of the Fuller Story since it came to the city in August 2018.

“We honor our history by telling more of it and more aspects of it, and I was really proud of how the community responded to it, in that people recognized that it was better to tell more of the story and to understand it more deeply,” Stuckey said.

The only somewhat dissenting voice came from Attorney Douglas Jones, representing the United Daughters of the Confederacy—the group that funded and dedicated the statue of Chip in 1899—during the discussion of the markers’ placement. Jones said the UDC, despite not being opposed to the markers themselves, did not want them near the monument; the UDC further claimed to have ownership of the land in Franklin’s town square.

“There was a court action in 1899—the year the monument was dedicated—from the county court that said they would provide property to the extent that it was needed for a monument,” Stuckey said. “But no deed was ever filed.”

According to Stuckey, the city is still in litigation with the UDC and has offered the land on which the monument sits, as well as the land extending a few feet out, to the organization, despite there being no evidence of a deed of ownership from the UDC. The offer does not include the land where the new markers have been placed.

The UDC did not respond to Community Impact Newspaper’s requests for an interview.

“That had been our settlement offer and still is,” Stuckey said. “They have not chosen to accept that yet. ... That offer continues to stand, and we’d love to sit down and see if there’s a way to resolve this.”

Despite ongoing litigation with the UDC over the square, the members behind the Fuller Story worked with the city to determine how many markers there would be and where they would be placed. The Franklin BOMA showed its support for the project by unanimously approving it during their final vote in February 2019.

“[Fuller Story] is a significant thing for our community—that our community came together and embraced our history and talked about it,” Franklin Mayor Ken Moore said. “I think that just speaks volumes to who we are as a community and why we are such a special place.”