This article will be updated until early voting ends Feb. 25.

With less than one week of early voting opportunities left before the March 3 primary, a total of 5,294 registered voters, or about 3.3%, have cast their ballots as of Feb. 20, according to the Williamson County Election Commission.

Early voting began Feb. 12 at two out of five locations in the county, including the Williamson County Administrative Complex at 1320 W. Main St., Franklin, and the John P. Holt Library at 8109 Concord Road, Brentwood. All five early voting locations opened Feb. 18, and early voting at all locations will end Feb. 25.

“Early voting is extremely popular with many of our voters because it allows some flexibility to those who may be unable to cast a ballot on election day,” Administrator of Elections Chad Gray said in a release. “However, if you do vote on election day, March 3, voters may now go to any of our 25 Election Day Convenience Vote Center sites from 7:00 a.m. to 7:00 p.m. regardless of your place of residence inside the county.”

Tennessee, along with 13 other states, will participate in the March 3 Super Tuesday primary to help determine candidates for president. Williamson County voters will also see three incumbent Republican candidates running unopposed for the three local positions, including Dusty Rhoades for sheriff, Brad Coleman for assessor of property and Mike Spitzer for circuit court judge, 21st District.


What to expect on the ballot

The following candidates listed may vary based on voters' primary preferences.

*Denotes incumbent candidates or candidate appointed to an unexpired term

**Denotes candidates that have dropped out of the presidential race but will still appear on the ballot.

Williamson County residents can cast a ballot at any of the five early voting locations beginning Feb. 18, regardless of their actual place of residence.


Voters who cannot obtain one of the six acceptable forms of photo ID due to a reasonable impediment may present a supporting form of identification and execute a Reasonable Impediment Declaration.

Development will soon begin on an active adult community for residents 55 and older looking to downsize near Westhaven.

The company's newest location is now open on Hillsboro Road. 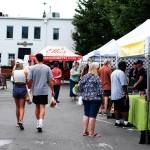