Even as growth and development spread ever-outward in Williamson County, one rural tract of land in Brentwood will stay undisturbed for future generations.

The Brentwood City Commission voted unanimously March 9 to approve the purchase of 52 acres of the 90-acre Windy Hill Farm, located near Old Smyrna Road, a historic corridor in the area. The city will buy the land at its appraised value of $100,000 per acre, for a total of $5.2 million, and convert the land into Windy Hill Park, preventing the area from being turned into an additional neighborhood.

“This is a significant action by the city,” City Manager Kirk Bednar said. “If this property wasn’t purchased today, it goes away. It would be a subdivision, and it just leads to a continuation of that type of development. So this is an important step for the permanent preservation of green space in this community.”

The purchase of Windy Hill Park will be funded with a combination of city revenue and private dollars, according to the city. The majority—$5.05 million—will come from the city’s general fund balances over the next two years as well as from revenue from Williamson County’s Adequate Facilities Tax, a portion of which is awarded to the city each year. The remaining $150,000 will come from local nonprofit Citizens for Brentwood Greenspace.

“When we first heard about this, it was almost like a dream come true,” CBGS President Gil Hutchinson said. “Old Smyrna Road is a historic corridor. It’s one of the few iconic stretches of roads that still exists. You don’t get these kinds of chances very often.” 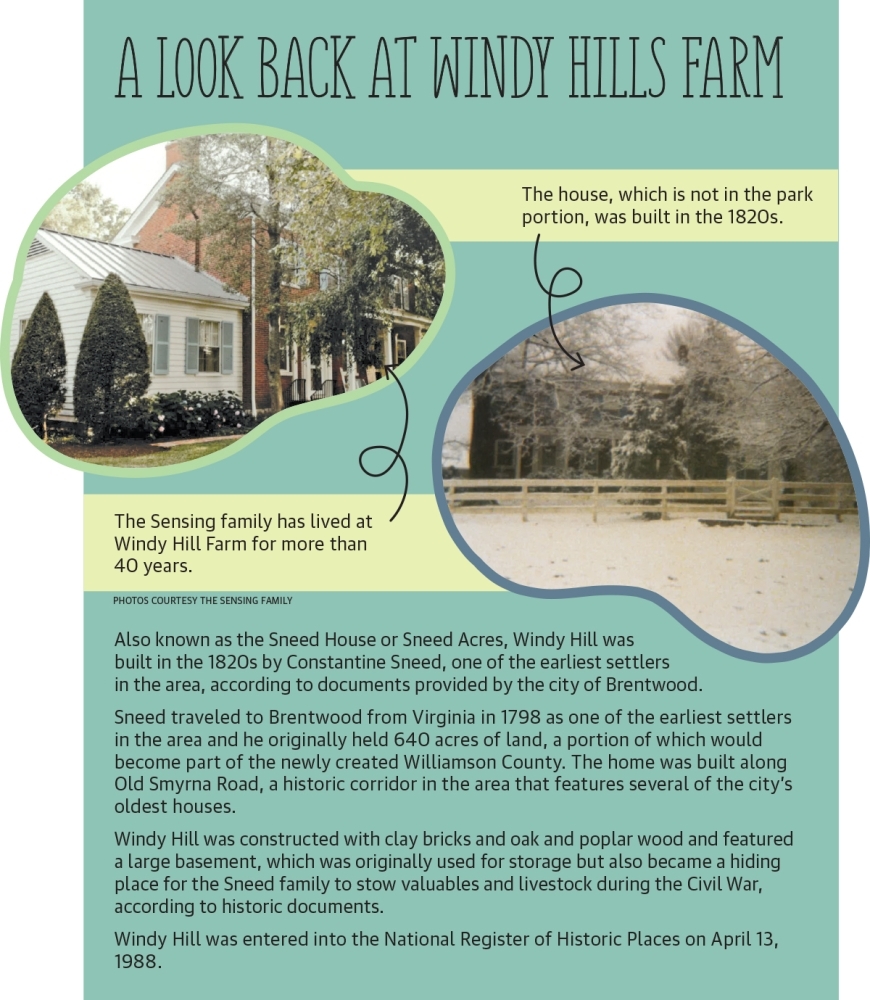 For more than 40 years, the land at Windy Hill Farm has been owned by Wilbur and Lucy Sensing. When the couple decided to move, they said they knew they wanted to see the land preserved rather than developed in the way the land surrounding their property was.

“We’ve lived in Brentwood now for 45 years on Windy Hill Farm and enjoyed it immensely,” Wilbur Sensing said. “We’ve raised our family here. ... We were hoping we wouldn’t have to [see it become] a subdivision, that we could make it either into a permanent farm or a park, and the park is really the best way, we think. And we thank [the city] for that.”

The home on the land, Windy Hill, is one of the oldest named homes in the area; it dates back to the 1820s, according to documents provided by the city. Preserved over the decades, the property was entered into the National Historic Register in 1988. However, the house is not on the portion of the land being purchased by the city.

To prevent the rest of the land from being developed, the Sensings have opted to place the land into a conservation easement, a voluntary agreement that limits how the land can be developed and subdivided, according to The Land Trust for Tennessee, a nonprofit organization that works to preserve natural and historic landscapes across the state.

Had the land been purchased by a developer, existing density and zoning requirements show the parcel could have been used to build at least 50 houses in the space, which city staff said would have resulted in more cars on city streets and less overall green space within city limits.

“This property is ripe for development. It’s the only property on Old Smyna Road today that exists that is zoned R2, meaning it could be 1-acre lot developments similar to what you see all around it,” Bednar said. “It is a prime piece of property for development, if that’s the way the family wanted to go [with] it. [But] that is not the way they wanted to go with it, very much to their testament.”

While the land sale is expected to close in June, residents should not expect to be able to access the new park quite yet.

Bednar said while the city had funding readily available to purchase the land, it will still be some time before the city can begin work to develop it.

“This is probably not something [where] we will move forward immediately with further development,” he said. “We’re probably a few years down the road before we can fund this and fit it in with our other capital priorities, but by making the purchase today, we preserve it there for the future.”

According to a conceptual plan, the city plans to develop the land as a “passive park” by adding trails, fencing, open fields and picnic areas rather than athletic fields. The city has also identified access points at Old Smyrna Road and Jones Parkway for some small parking lots. However, these amenities are still only proposals, according to the city.

In addition to conducting an environmental survey, which is expected to be complete before the land sale is finalized, Bednar said city staff will also develop a master plan for the park, part of which will include asking the community for input on what should be included. 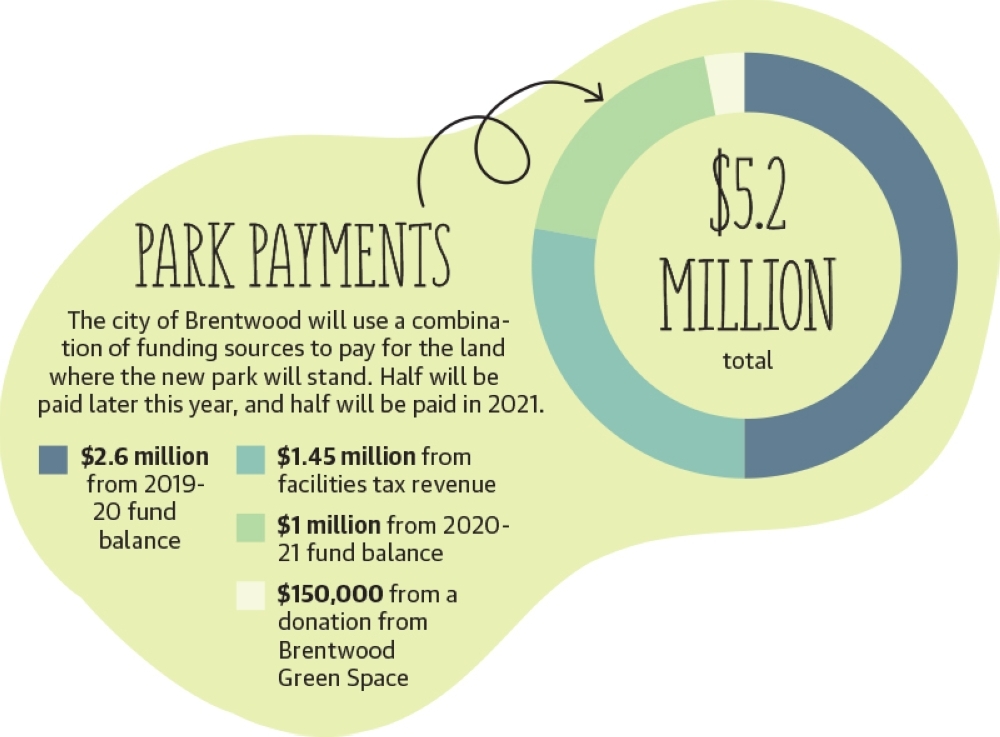 Windy Hill Park will give an estimated 1,900 residents new access to parkland, as the city currently does not have park amenities in that area. Bednar said the park fits into goals identified in the Brentwood 2030 Plan, which outlines needs for the city over the next 10 years.

During the first approval vote Feb. 24, city commissioners each spoke on the significance of saving the land for future generations of residents to enjoy.

“It just renews my faith in human beings. Every day, we’re bombarded by stories of greed. ... We take so much. [So] it’s nice to know that there are people out there that still value green space and value history and their community,” Commissioner Anne Dunn said. “The love that [the Sensings] have for their family growing up on that property ... That’s how you want to remember that property, and I’m so glad that we can be a part of it.”•Mayor Rhea Little thanked the family for their help in preserving one of the city’s last historic corridors.

“I’d like to thank the Sensing family for their willingness to do something that was not necessarily in their most beneficial favor, and it will keep Old Smyrna corridor the way it was when I was a child,” Little said. “And I think that’s a wonderful thing for the city and the residents that live in that area.”