Mimi’s Room, a safe space for children attending court hearings within the Williamson County Juvenile Court, underwent renovations in late 2019 to update the space. The room now features more seating space, room for caseworkers and a television for children to watch while awaiting proceedings. Renovations were completed by Skanska as well as 906 Studio Architects and Steve Ward and Associates. The room was created in 2013 inside the courthouse, located at 408 Century Court, Franklin. www.williamsoncounty-tn.gov
Tags: Mimis Room , Skanska , 906 Studio Architects , Steve Ward and Associates , Williamson County
SHARE THIS STORY 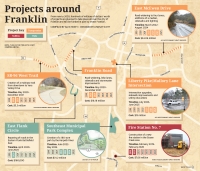 See which projects are coming soon to your neighborhood.