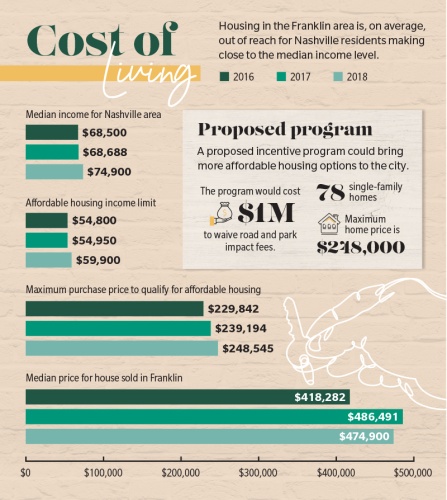 A new idea for housing incentives in the city of Franklin could bring a more diverse mix of housing prices to the area, which could relieve workforce and transportation woes for residents and employees in Williamson County.

Officials with the Franklin Housing Commission brought a proposal to incentivize workforce housing—single-family units costing no more than $248,000—to the Franklin Board of Mayor and Aldermen in late February in an effort to provide a more diverse mix of housing price points to the region.

Elizabeth Wanczak, chairperson of the FHC—an advisory board for the BOMA—said the incentive program is in line with the city’s long-term comprehensive plan, Envision Franklin.

“The Envision Franklin plan … it talks about a variety of housing options for the diverse population the city envisions us having,” Wanczak said. “This is a specific area that we think is important to cultivate, and it’s particularly growing. When we see demographics changes, young professionals particularly are moving into Franklin. This would be an opportunity for them to do that.”

The proposal includes a $1 million contribution from the city to offset road and park impact fees, a cost that developers pay upfront before new neighborhoods can be built, which can be a barrier to more low-cost options. Wanczak said the idea was brought to the commission after going through staff and the Franklin Housing Authority, a separate entity from the commission.

“The mission of the housing commission is to help in securing affordable housing for the citizens of Franklin,” Wanczak said. “We’re basically trying to figure out ways to work with the city to deal with a problem that is happening nationally.”

Not to be confused with low-income housing, which is provided through the Franklin Housing Authority, workforce housing aims to provide attainable housing options for residents. Workforce housing is defined for those making close to the annual median household income, which for the Nashville Metropolitan Statistical Area is $74,900 for 2018. The Nashville MSA includes the cities of Nashville, Murfreesboro and Franklin.

For a family of four, the maximum home price that is considered affordable at that income is $248,545, according to the U.S. Department of Housing and Urban Development’s definition. Vernon Gerth, assistant city administrator for Community and Economic Development, said adding more moderately priced housing could help meet the needs of residents with varying income levels, such as teachers, service industry workers, police and firefighters.

“In an ideal community, having a mixture of housing price points helps maintain the diversity needed to support the local economy, meaning that you have different workers’ salaries,” he said.

The economic factor of the program has caught the attention of local business officials who argue more affordable housing is needed to meet the needs of employees in Williamson County.

“Some of the feedback we get from our employers is they’re concerned about losing their key employees because they have to drive so far into Williamson County for their jobs,” Largen said. “So, because of the cost of housing, it creates additional traffic on the road, and it also reduces the potential pool of applicants they can draw from for employees.”

Wanczak said concerns from the business community were a factor in developing the proposal.

“The business community has absolutely said this is a problem that they’re really struggling with,” she said.

“We feel like this is a market-based solution because it involves developers coming in and making use of a plan put in place by the city,” he said. “I’ve met with two different homebuilders who have a desire to build housing at this level because they understand there is a need for this in our community.”

Adding more options for Nashville-area residents who work in Williamson County could have a domino effect on area traffic.

The U.S. Census Bureau’s 2009-13 American Community Survey estimates about 50,000 residents commute to Williamson County daily from nearby counties, the highest being Davidson, Rutherford and Maury Counties.

Wanczak said providing more attainable workforce housing options could mean some of those people commuting into Williamson County could opt to live closer to where they work, reducing commute times.

“Just about as many people commute into Williamson county as commute out of Williamson county,” she said. “As we’re continuing to be such a growth for economic opportunity here with so many companies relocating, providing housing opportunities where people wouldn’t have to live in a surrounding county or from Nashville and be able to live 10-15 minutes from work really will help with congestion and traffic.”

Since the February presentation, Gerth said city staff is working to refine the proposal before it is brought back to BOMA for further discussion, which could occur as early as late April or May.

Because the proposal is still in its initial planning, officials said there is no timeline for when the proposal could be approved or implemented in the city; however Wanczak said prospective homeowners or renters would need to meet income standards to qualify for the incentivized housing.

“They would have to qualify based on the HUD median income for the Nashville MSA,” she said. “Someone could not purchase one of these homes if they had an annual income that did not sit within those guidelines.”

While it is unclear if the BOMA will approve the incentive to bring workforce housing to the area, the city is considering the idea of adding more diverse housing options. During an April 9 meeting, the board approved a resolution to direct city staff to seek out interest from developers to build attainable housing in a city-owned property at 405 Fifth Ave. known as The Hill.

Ward 2 Alderperson Dana McClendon, who is also on the housing commission, said he hopes the concept will be embraced in the area rather than seen as low-income housing.

According to the housing commission’s 2018-19 annual plan, both available space and public opinion can be barriers to affordable housing.

“That’s the goal here is to create a pilot program that everybody can point at and say, ‘Yeah, if we’re talking about affordable and workforce housing, then I’m for it,’” he said.

Wanczak said she is hopeful Franklin will lead the way to show other cities how to address an area-wide problem.

“We’re so excited that there seems to be energy behind doing something,” she said. “This is an issue that Franklin is not unique in facing, but we believe that Franklin can find the unique solutions to answer this question in the best way.”