On June 2, as hundreds of Franklin residents gathered in the parking lot of First Missionary Baptist Church in remembrance of George Floyd and many other Black Americans who have died unjustly, Franklin resident Dustin Koctar spoke out against racism and the “All Lives Matter” slogan created in response to Black Lives Matter.

Though this is not the first time the issue of Chip—the statue in Franklin’s Public Square—has been addressed, in the weeks following the vigil, citizens have spoken out against Confederate symbology across the city, county and school system, including the Williamson County Seal and Franklin High School’s Rebel mascot.

“As fellow believers, racism has no place in the fruits of the spirit,” Koctar said. “If your allegiance to a particular political party or membership to a certain church keeps you from speaking out against racism or fighting for justice for Black lives, then your toxic loyalty is part of the problem.” 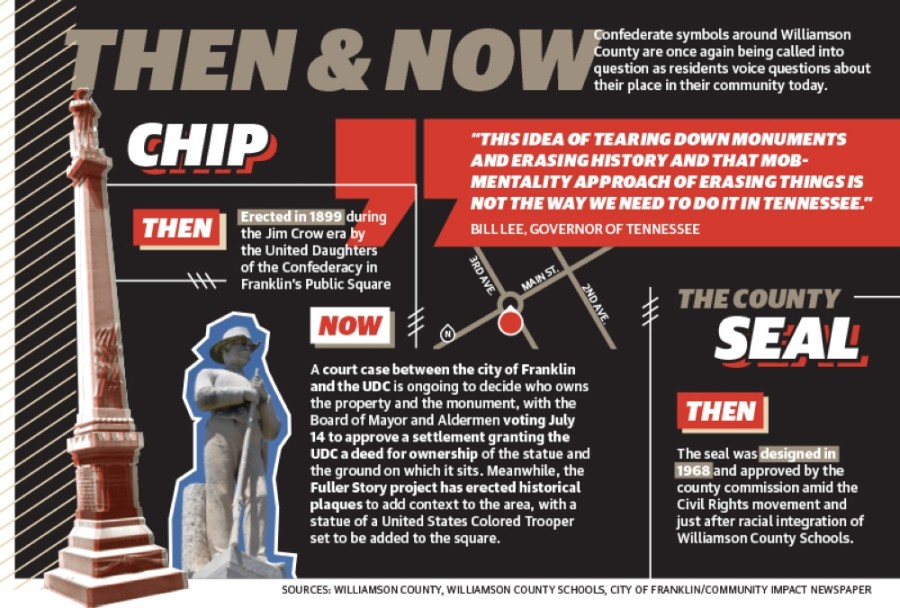 • Williamson County coronavirus cases rise by over 70 in 24 hours

This summer has seen many Southern cities and towns make moves to relocate Confederate statues and update flags, causing many to question the origins of longstanding local icons and symbols. The city of Franklin and many areas of Williamson County hosted historic battles during the Civil War in the 1860s, and residents can see many markers showcasing stories from both the Union and the Confederacy.

However, many Confederate monuments and symbols were not erected until decades after the war had ended.

Williamson County historian Rick Warwick said Chip in downtown Franklin was the first Confederate monument in the area—it was erected in 1899—and that it owes in large part to the “Lost Cause” mentality, or the prevailing belief in the post-Civil War American South that the war was a conflict to protect not the institution of slavery but rather states’ rights and the Southern way of life.

Though no one can know fully what the purpose of erecting the Confederate monument in Franklin were at the time, Warwick said the placement of Chip coincided with the enactment of Jim Crow laws and with further suppression of Black Americans after their freedom from slavery.

“It’s strange that the losers get to write the history, and that’s what happened,” Warwick said. “Usually, the winners write the histories and tell their story, but in America, the Southern historians got there first, and they wrote the history in their viewpoint.”

The seal of Williamson County is also being called into question for depicting a Confederate flag in its top-left corner in front of a cannon. Many residents have voiced concerns about how the flag depicts Williamson County.

Warwick said the seal was designed and adopted in 1968 shortly after the integration of Williamson County schools and at the height of the civil rights movement. Another change in Franklin occurred in 1937 during the Jim Crow era when the then-mascot of Franklin High School, the Pioneers, was changed to the Rebels, a common name for the Confederate army. Though Warwick was not around during the change, he said he remembers the racial climate when he arrived in Franklin as a teacher during the 1970s.

"The Franklin High School Rebels had just gone through integration in 1967, and I think the Black students who went there at the time were made to feel very uncomfortable,” Warwick said. 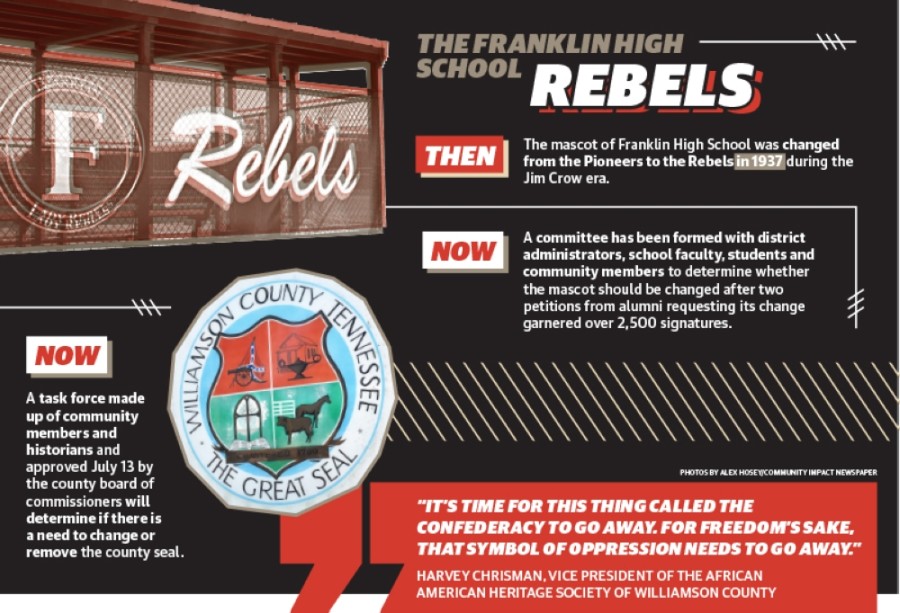 Officials with Williamson County Schools announced in early July a committee has been formed to revisit the mascot and seek recommendations from the public following the submission of two petitions with over 2,500 signatures requesting its change reached Principal Shane Patall.

In July the committee made a recommendation to change the mascot to Superintendent Jason Golden, who announced the mascot will be removed effective immediately

Before protests erupted across the nation this year calling for racial equality, efforts to balance the Confederate symbol of Chip were well underway in 2019, as the Fuller Story project added five historical markers detailing the stories and the hardships of Black Americans.

However, despite public support for the Fuller Story, the United Daughters of the Confederacy initially protested the project, and there remains an ongoing legal dispute as to who owns the land on which the public square sits. The Franklin Board of Mayor and Aldermen voted July 14 to approve a settlement granting the UDC ownership of the statue and affirming city ownership of the public square.

The Fuller Story founders Chris Williamson, Kevin Riggs, Hewitt Sawyers and Eric Jacobson have previously said the aim of the project was to add more context to the city’s Civil War history by adding more monuments and markers to the area, rather than taking others down. Most recently, a statue of a United States Colored Troop soldier has reached its goal for funding, with a place already prepared in downtown, according to Stuckey.

“Those efforts continue to tell a more inclusive story about our history overall, especially as it relates to African Americans before, during and after the Civil War,” Stuckey said.

About 10,000 people have signed another online petition calling for change to the county seal due to the inclusion of a Confederate flag in its top-left corner.

The county board of commissioners approved July 13 the creation of a task force composed of community members and historians to determine if there is a “substantial need” to change the design, as per the requirements of the Tennessee Historical Commission.

Once the task force returns with its recommendation in September, the appeal to alter the seal will require a two-thirds vote of approval from the historical commission. Tennessee Gov. Bill Lee, who sits on the commission, said July 14 he does not support “erasing history” by taking down monuments, but rather that he supports initiatives, such as the Fuller Story, that attempt to add context.

“This idea of tearing down monuments and erasing history and that mob-mentality approach of erasing things is not the way we need to do it in Tennessee,” Lee said. “We need to do it in a process and engagement with communities—that’s what they’re doing in downtown Franklin.”

Though markers and another statue add context, some residents, such as Howard Garrett and the 10,000-plus others who have signed a petition on Change.org, support going a step further and removing Chip.

“I don’t think [the Fuller Story] is enough, because at the end of the day, the statue and the reminder and the image of what it stands for is still there,” Garrett said.

The African American Heritage Society of Williamson County released a statement July 14 calling for another marker to be added to put the monument in historical context.

However, AAHS Vice President Harvey Chrisman said he would rather see the monument removed, as it represents a reminder of oppression.

“I’ve tried not to pay attention to that statue all of these years. I’d always go around that square and never look up,” Chrisman said. “But lately, the blood of those Union soldiers and the blood of those slaves who died—the blood of those who toiled on the different plantations are still crying out from the soil. It’s time for this thing called the Confederacy to go away. ... For freedom’s sake, that symbol of oppression needs to go away.”

Editor's note: This article has been updated from Community Impact Newspaper's July 2020 edition to include the announcement from Williamson County Schools that the Rebels mascot will be removed.
SHARE THIS STORY

A virtual public information session for Aureum, a new mixed-use project being proposed by SouthStar LLC and Chartwell Hospitality LLC will be held Tuesday night.